Look at this advertisement from various US newspapers in 1880:

This was a traveling troupe nationwide.
The person behind is was “Professor” James Rosedale, who says he was a convert from Judaism to Christianity and who brought these Arabs to America – billing them as the only Arabs ever to leave Palestine.
Rosedale appears to have been a Middle East PT Barnum. You can be very certain that there was not a single Jew in Jerusalem in 1880 with the name “Rosedale.” This guy was a flim-flam man, knowing that the curiosity of being a convert will help get him speaking gigs.
He gave a lecture in 1885 that included his supposed history, some tales about Jerusalem and the Arabs of Palestine.

THE CONVERTED JEW.
His Lecture Last Night.
Prof. Rosedale, the converted Jew, as he styles himself, delivered his much advertised lecture at the Baptist church last night, to a rather slim audience. He began by saying that he had been a Jew all his life until about ten years ago, when he embraced Christianity. Singularly enough. Prof. Rosedale did not state where he became converted, or by what means. Neither did he tell his hearers where the change took place in his religious views, or what caused him to depart from the religion of his fathers. Reclaimed to believe in Christ, and to be a follower of Christ, and said he was honest and sincere in his belief.

Prof. Rosedale stated that the houses in  Jerusalem and Palestine were fortresses, instead of homes. They were forced to be built that way on account of the many invasions made in days past by hostile tribes and nations upon the people of that section.

…He spoke of Joppa and its beautiful gardens, and luscious grapes, stating that he weighed one bunch which pulled down the scales at 17 pounds. …He explained the story of Sampson tying the foxes’ tails together and setting fire to them. He said it was a common practice, even in this day, to catch foxes, tie their tails together, set fire to them and start them an enemy’s field to destroy his grain. The professor did not say whether the foxes’ tails were soaked in kerosene before starting or not, but left his audience to think out the puzzle of the inflammable qualities of a fox’s tail.

He told how the peasants plowed with a cow and a woman side by side. Said men never dined with their wives in Palestine—the woman always standing behind the man , while he ate. That when men meet each other in that country they salute by kissing, and keep on kissing as long as the conversation lasts. They do their churning in goat skins, with the hair inside. “The difference in your butter and our butter,” said the lecturer. “is that your butter is bald-headed, while our butter has hair on it.”

There are 85,000 Jews now in Jerusalem, and they are moving there every year. The wall around the city is  eighty feet high…

Children, when born in that country, are soaked in salt brine for three days, and are then washed and well greased with olive oil, which is said to give perfect  immunity from diseases in after life.

Tonight the protessor will lecture on “A Pilgrimage to Mecca,” when the church will, no doubt, he filled.

None of this sounds true in the least, and he obviously never went to Mecca unless he was a Muslim, too.

He gave this interview about his Arab troupe in America: 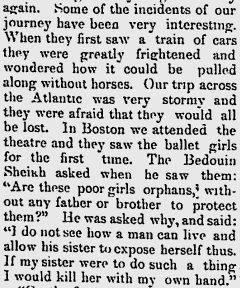