Part of the Fatah platform from its previous conference in 2009 calls for:

Restoring our direct and strong relations with the Israeli peace camp, and revitalizing our joint action for a just peace, without mingling it with normalization with Israel, which is rejected while occupation continues.

In other words, trying to divide Israeli society.

Fatah actually acted on this plan. The PLO created a “Committee to Communicate with Israeli Society,” in 2012, headed by Muhammad al-Madani.

The committee caused some controversy because it was viewed as being a type of normalization. The PLO responds by saying that this is purely political. One official said that the committee is meant to “change this Israeli perception of the Palestinians, and try to exploit the political differences” within Israel and to “change the opinion of the Israeli voter” in any future elections. It is very much against any joint cultural or sports programs with Israelis – it is purely a one-way propaganda outfit, not a call for dialogue. 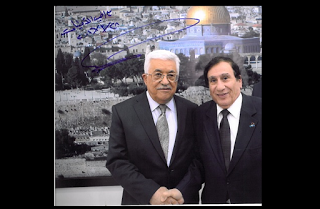 The committee has had limited success. This week, the committee arranged a meeting between Mahmoud Abbas and some unnamed leftist Israelis of Iraqi descent. Abbas said that as people who understand Arab culture, they could be key in bringing peace to the region.
.

It seems likely that one of those Iraqi Jews is Dr. Shmuel Moreh, a professor emeritus for Arabic Language and Literature at the Hebrew University and a recipient of the Israel Prize in Middle Eastern studies in 1999. He has met previously with Abbas, as recently as April, along with a delegation of Iraqi Jews. He wrote about it in an Arab newspaper.

There can’t be that many leftist Israeli Iraqi Jews so chances are the Committee is recycling whoever they can find.