Fatah issued a statement yesterday warning Palestinians not to celebrate the fires on social media.

Munir Aljagub, head of Fatah’s media committee, says that it is irresponsible to give the impression that Palestinians are “dancing on the flames.”

Which is of course exactly what they are doing.

After all, the statement says, the trees and stones that are burning are “Palestinian.” And Netanyahu is well aware of the sanctity of the land to Palestinians as he accuses them of setting some of the fires, according to Aljagub. It is him that is politicizing the fires, not the Arabs who set some of them or the thousands of Arabs who have publicly celebrated the destruction.

The statement called on Palestinian Arabs to show “historical responsibility” and not to use language and terminology that could expose them to accusations of not loving the land they are celebrating is being destroyed.

I can show them a bit about historical responsibility.

Arabs clearly didn’t get the memo. For example, prominent Arab singer Ahlam al Shamsi  – with over 7 million followers on Twitter – tweeted joy for the fires, hoping that that the flames “rip to shreds” the Israelis and showing dancing emojis. 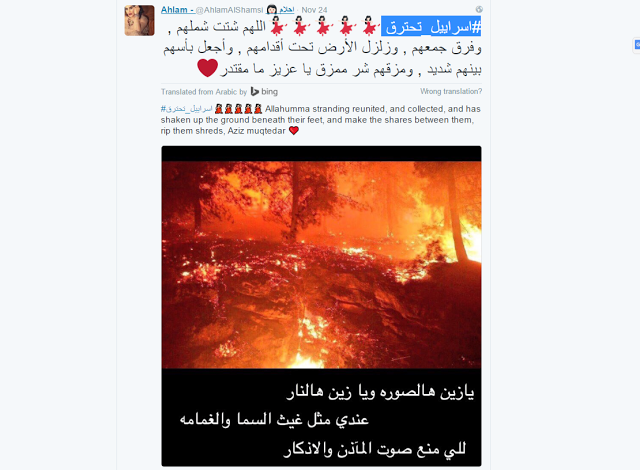 She’s one of many Arab celebrities who celebrated the fires.

Or this tweet, shared nearly a thousand times, celebrating a distraught Israeli woman who wants to run into her house that is aflame because her dog is inside.

Notice that Fatah is not saying that it is wrong to celebrate the misfortunes of Israelis because it is immoral to be happy at the tragedies of others. The spokesman is simply saying that it looks bad to the world to publicly cheer the fires.

By the way, a two year old Arab child died in a house fire near Ramallah today. No one in Israel is celebrating.