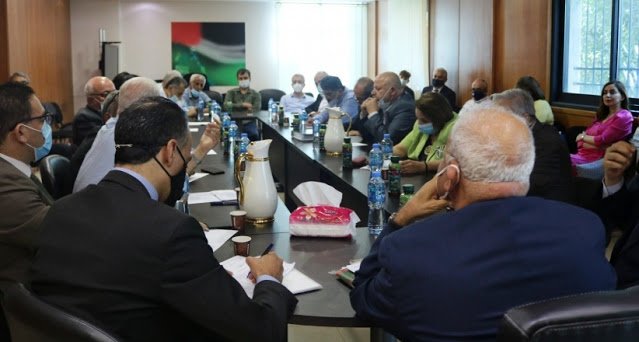 The PLO has been spending lots of time talking with EU representatives, since the EU is now the only reliable partner it has.
It’s message is a bit muddled, though.
Hanan Ashrawi met with the EU representative to the Palestinian Authority today where she told him that Palestinians were still the center of the universe – and that Israeli normalization with Arab countries could actually be a bad thing. Really.

Meanwhile, Saeb Erakat and leaders of Palestinian civil society groups met with EU funders in Ramallah to discuss EU laws that prohibit funding NGOs associated with known terror groups. Israeli groups like NGO Monitor have been exposing links between EU-funded NGOs and Palestinian terror groups, which has caused a curtailment of some funding.
Erakat wanted to work with the European NGOs to discuss joint action mechanisms to press the European Union to remove Palestinian political parties from list of terrorist groups, claiming that categorizing groups such as the PFLP as terrorist is a scheme by Zionist lobbies aimed at delegitimizing components of Palestinian society and targeting the Palestinian narrative. He wants to coordinate roles between the PLO and the anti-Israel European NGO funders to influence and change the European financing conditions for Palestinian civil society institutions.
Erakat stressed that he wants the group to reject any labeling of any Palestinian faction as terrorist. Presumably this includes Hamas and Islamic Jihad. He claimed that putting anti-terror conditions on these funds is “political blackmail to destroy the Palestinian national project.”
One wonders how kindly the sympathetic EU will be to messages from the PLO that peace is bad and terror groups are legitimate.