The head of the Palestinian Football Association has threatened that if FIFA, the governing body of international soccer, doesn’t decide to suspend six Israeli teams from West Bank settlements, he’ll petition the Court of Arbitration for Sport for a ruling on the issue.

FIFA’s president has been trying to broker a solution to the issue through agreement between Israel and the Palestinians. But such a petition would make this effort impossible.

Jibril Rajoub, who heads the Palestinian association, told a press conference that allowing the settlement teams to play is a gross violation of both FIFA’s bylaws and those of the Union of European Football Associations, of which Israel is a member.

What a perfect microcosm of how Palestinian Arabs view Israel as a whole.

They push international bodies to misinterpret international law (or, in this case, sports statutes) and create new laws that apply only to Israel.


[T]here is simply no support in international law for prohibiting business [like sports teams – EoZ] in occupied territories, as British and French courts have recently affirmed.

Indeed, Morocco maintains a team, part of its national football federation, in occupied Western Sahara. Yet the HRW completely fails to mention this fact in its report. The human rights abuses in Western Sahara — where the majority of the population are Moroccan settlers and the indigenous population has been heavily displaced — are too vast to recount. No one — including the HRW and the Parliament members — has suggested expelling Morocco on account of its team, based deep in land taken from the Sahrawi.

The football-as-human rights-violation arguments against Israel are tendentious and prove too much. So those campaigning against Israel rely principally on a lawyerly claim about FIFA’s rules: The clubs “clearly violate FIFA’s statutes, according to which clubs from one member association cannot play on the territory of another member association without its and FIFA’s consent,” the members claim.

The problem is nothing in the FIFA statutes that equates “territory” with sovereign territory. Indeed, that would be impossible, since many FIFA members are not sovereign states at all. Instead, territory, as is often the case in international texts, means jurisdiction.

This is because the FIFA is not a border demarcation body. That is why FIFA clearly separates any question of sovereign statehood and territory from FIFA membership by not requiring that member federations be recognized states (i.e. Hong Kong, American Samoa, Faroe Islands, Northern Ireland, etc.). The claim that the acceptance of the Palestinian soccer federation into FIFA constituted a recognition of Palestine as a state and a recognition of its maximal border claims is unsupportable. FIFA membership does not imply statehood, nor has FIFA ever taken a position on preexisting border disputes.

Indeed, FIFA practice makes clear that it never gets involved when teams of one federation play on territory that is the subject of sovereign claims by the state of another member.

Another clear parallel between sports and the real world is that the Palestinians show that they have no interest in negotiations or compromise. If they don’t get their way – they threaten anyone who stands in their way.

Palestinians are hijacking every international body that they join and turning them into anti-Israel weapons to the detriment of their otherwise laudable goals. They did it with various UN bodies (like UNESCO) and they are trying to do it with FIFA.

Yet another analogy: Palestinians rip off what Israelis do, as Jibril Rajoub used a Bibi-style prop when speaking to FIFA: 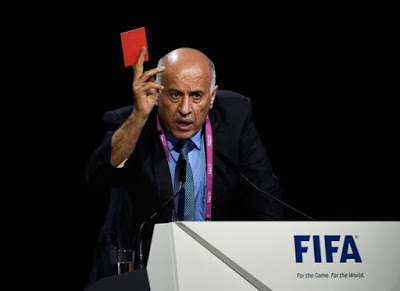