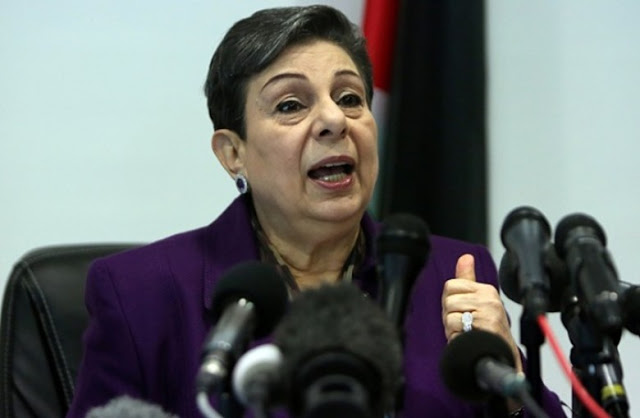 Member of the Executive Committee of the Palestine Liberation Organization  Dr. Hanan Ashrawi, said Monday that the opening of the American Embassy in occupied Jerusalem is a new calamity for the Palestinian people and for international justice and international legitimacy. This unilateral action demonstrates the control of the logic of force and violence and the crushing of all that is legal and humanitarian.

And the sky will rain fire and the Earth will be thrust out of its orbit, turning it into a giant asteroid ready to crash into the sun, obliterating mankind forever.


She added in a press release on behalf of the Executive Committee on the occasion of the 70th anniversary of the painful Nakba of Palestine and the opening of the American Embassy in Jerusalem, “The Nakba with all its racist connotations is still ongoing. Israel, the occupying power,  with the support and participation of the United States, implements its deliberate plans based on judaizing the Palestinian space and place, stealing the land, history, the Palestinian culture and history. “

Forgetting the other obvious lies of Ashrawi, it is past time to look at the Palestinian claim that Israel is “Judaizing” Israel.

Israel has been the center of Jewish prayer and thought since the days of Moses. The archaeological evidence alone (which the Palestinians strenuously deny exists) is overwhelming.  Way before Zionism, Jews have made rebuilding Jerusalem the central motif of their prayers.   The rocks and stones of Israel are witness to the miracle of the rebirth of the Jewish nation in much of her historic lands.

When Ashrawi and Abbas and the other Palestinian leaders complain about “Judaizing” the Jewish home, they are denying Jewish history, Jewish practice and millennia of Jewish longing.

It goes hand in hand with the Arab claim that Jews are not a nation or a people, but merely a faith.

If “Judaizing” is such a crime, what is Islamicizing? Because the entire religion of Islam is an attempt to supersede Judaism (and to a lesser extent Christianity.)  Every single Islamic tenet is a distortion of a Jewish law. Every single Jewish shrine in Israel, bar none, is claimed by Muslims to be their own, even though every single one of them is older than Islam. The mosques on the Temple Mount, at the Cave of the Patriarchs and at Rachel’s Tomb were built deliberately to erase Jewish history and claims.

The claim of “Judaizing” is Arabs saying that Jews do not belong in the land that everyone (including the Quran) knows is Jewish. At best, the Jews should be tolerated as second class citizens under a supremacist Islamic ideology and political system.

The claim of “Judaizing” the Holy Land is pure antisemitism. And it is way past time to call this out.