When the “Green Line” between Israel and Transjordan was demarcated in 1949, there was more than one line.

Besides the major one that separated the armed forces of both sides, there was another one that completely surrounded Mount Scopus. 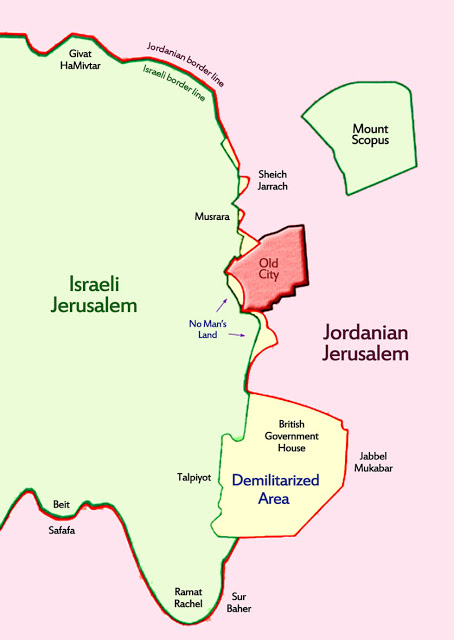 Mount Scopus, which housed Hebrew University and Hadassah Hospital, remained nominally under Israeli control, but in fact the Jordanians were not keen on letting that area have any Jews. Even thought the armistice agreement specifically allowed  Israel to have free access to Mount Scopus to run the university and hospital, Jordan reneged. After much negotiations, an Israeli police presence was maintained on Mount Scopus and every 2-4 weeks a convoy of fresh supplies (or police) would come, protected by the UN, while the university and hospital were abandoned.

That was the status quo of Mount Scopus for 19 years.

Which means that, today, the areas between Mount Scopus and the main Green Line are considered “occupied territory.”

So if you visit the edge of the Mount Scopus Green Line today, you can see this: 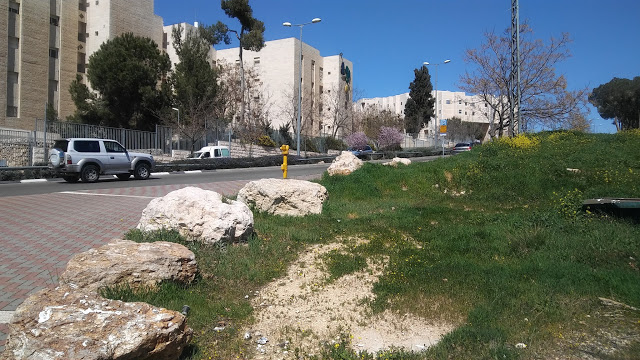 The foreground is considered Israeli territory by the world. Across the street, though, are “illegal settlement structures.”

As I have mentioned, the hotel I was staying at last week was in one of those “illegal settlements” a short distance from where this photo was taken, in French Hill.

French Hill was specifically created to help provide a connection between Mount Scopus and the rest of Jerusalem. 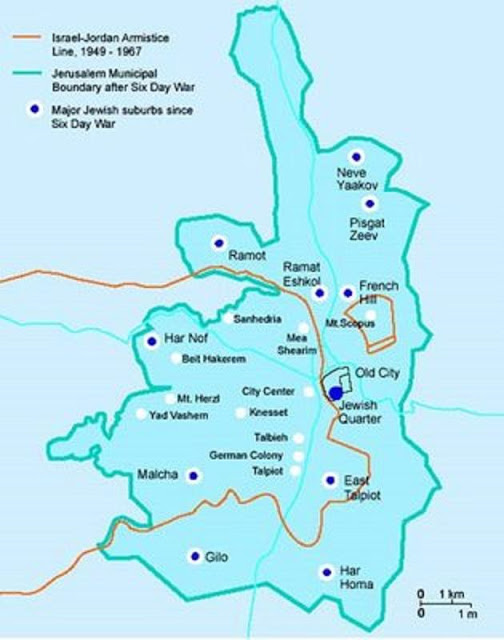 In no sane scenario could Israel ever give French Hill away in any “peace plan.” The entire idea of a disconnected Mount Scopus is a travesty and anyone who says that Israel’s building the neighborhood in French Hill hurts peace is using the word in a perverted way. No Arabs lived there; it was the location of a Jordanian army site.

When the EU or the UN says that French Hill is a “settlement” and any building that happens there violates international law, the facts on the ground show that they don’t care about “justice” or “law.” There was no justice when Jordan violated the armistice agreement that should have allowed Israelis free access to Mount Scopus (as well as the Mount of Olives cemetery.)

And no one did a thing.

Keep that in mind when people self-righteously invoke “international law” against Israel. Because these people never invoked it for Israel.