The New York Times has an article about how countries are restricting freedom in the times of the pandemic – and what it says about Israel is quite inaccurate. 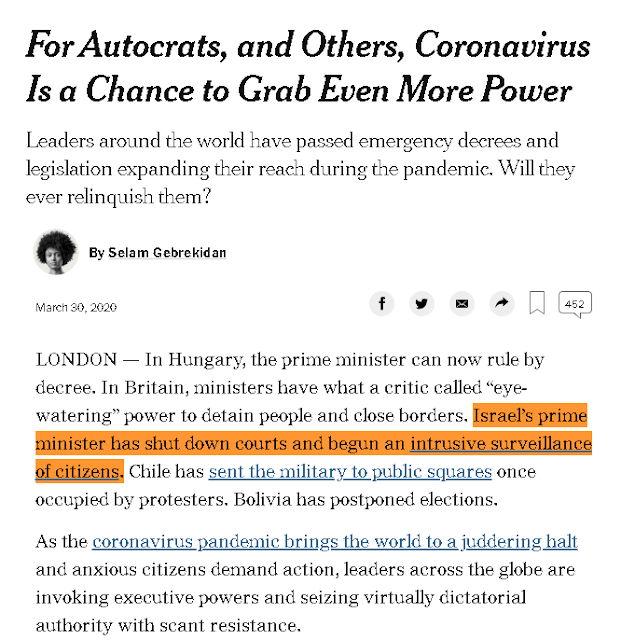 “Israel’s prime minister has shut down courts and begun an intrusive surveillance of citizens.”

In reality, Israeli courts have not been shut down. The Justice Minister together with the Courts Administration authority have postponed all non-essential hearings. The courts are still open.

The surveillance is of mobile phone metadata finding where potentially infected people have traveled. It is not much different than correlating the data from ubiquitous security cameras.

And neither measure was done at Netanyahu’s order. The limits on what court cases will be heard were carried out by the Justice Minister and Courts Administration. The surveillance was ordered by the Government (i.e., by vote of all the Ministers), in consultation with Attorney General, and approved by the Supreme Court (which has not been closed either.)

What this shows is that the Leftist tropes of an autocratic Bibi have become accepted by the media.

Moreover, the article is biased by what it doesn’t say. The only Arab nation it mentions is Jordan:


In Jordan, after an emergency “defense law” gave wide latitude to his office, Prime Minister Omar Razzaz said his government would “deal firmly” with anyone who spreads “rumors, fabrications and false news that sows panic.”

But autocracies like Syria and the Palestinian Authority don’t need new laws to limit speech. Palestinians have arrested journalists under an “electronic crimes law” that forbids saying anything the government doesn’t like. Syria has detained doctors who dare say that they have seen cases of coronavirus that the regime does not admit. Police in Lebanon have dismantled protest tents. Egypt expelled a journalist that said things not to the regime’s liking. Morocco passed a new law limiting what could be said on social media, similar to Jordan’s law.

But the New York Times decided that Israel was the autocracy where citizens’ human rights are threatened. These Arab regimes who really are using the emergency to grab more power are barely worth mentioning.