Last week’s anniversary of the Sbarro massacre was celebratedby the Aqsa TV channel, and their audience very much appreciated being reminded of the carnage perpetrated 16 years ago by Palestinian terrorists. 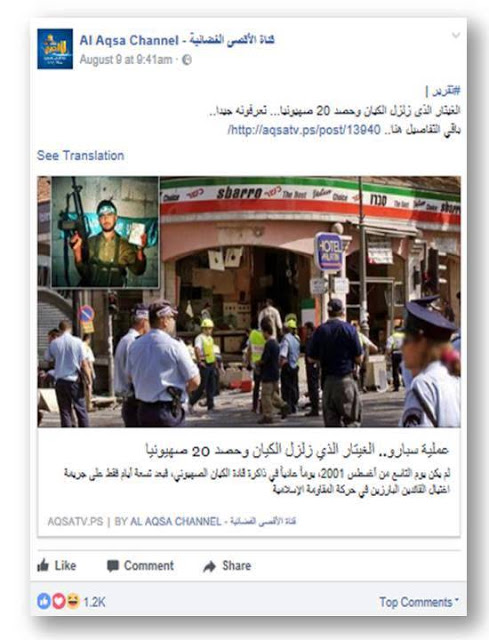 Last year, just in time for the 15th anniversary of the massacre, the American writer Ben Ehrenreich was busy celebrating all the praise he was receiving for his newly published book that glorifiesthe Tamimis of Nabi Saleh, who are not only ardent supportersof Palestinian terrorism in general, but who also have the greatest admiration for their relative Ahlam Tamimi, the proud mastermind of the Sbarro bombing.
We made a video back then, introducing Ehrenreich’s main protagonists.
It seems that glorifying terror supporters like the Tamimis is good business: for the 16th anniversary of the Sbarro bombing, Ehrenreich’s book came out as a paperback, and – just like last year – the New York Timesis doingits best to help Ehrenreich sell his book. 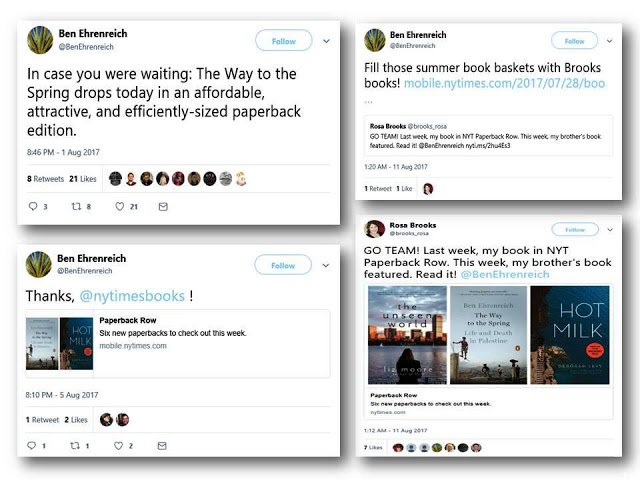 But it’s not just the New York Times that is urging its readers to get Ehrenreich’s book. Already a few weeks ago, the Middle East Monitor (MEMO), an Islamist site that organizes an annual “Palestine Book Awards”-event, shortlistedEhrenreich’s book for this year’s awards – which is, no doubt, a well-deserved honor for Ehrenreich. 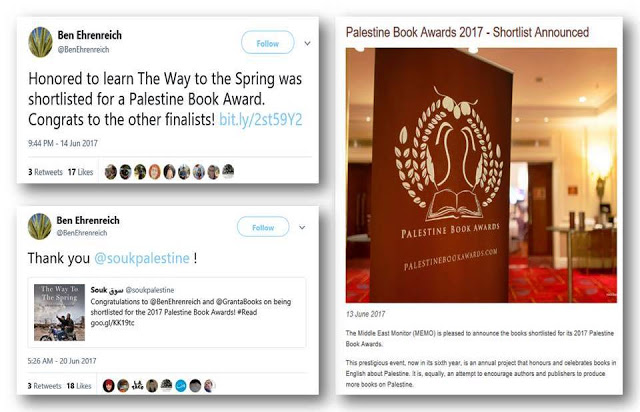 I sincerely hope he will get the award. As I explained three years ago, when veteran anti-Israel activist Ali Abunimah was honored by MEMO, it’s a bit like a Hamas “Books-of-the-Year” award. In Abunimah’s case it was particularly fitting that MEMO’s award presenter was Ang Swee Chai, who once defendedher promotion of material produced by white supremacist and former Ku Klux Klan Grand Wizard David Duke by explaining:
“I didn’t know who David Duke was, or that he was connected to the Ku Klux Klan. I am concerned that if there is any truth in the video, that Jews control the media, politics and banking, what on earth is going on? I was worried.”
The lady who so emphatically shares the worries of antisemites around the world remainsa “patron” of the “Palestine Book Awards”, and maybe Ehrenreich will be lucky and have the honor to meet her.
Another “patron” of the “Palestine Book Awards” that Ehrenreich might love to meet is Azzam Tamimi. I don’t know if he’s related to the Tamimis Ehrenreich adores, but he definitely sharestheir enthusiasm for Palestinian terrorism and considers his close ties to Hamas “a great honor.”
In any case, there can be no doubt that Ben Ehrenreich should like the MEMO-crowd just as much as he likes the Tamimis: read MEMO’s moving reporton the romance between convicted murderer Nizar Tamimi and convicted murderer Ahlam Tamimi and you’ll have to admit that Ehrenreich himself couldn’t have portrayed this union between two murderous terrorists in more sympathetic terms.
So let’s all cross our fingers that Ben Ehrenreich’s paean to the terror-loving Tamimis will get the Hamas Book Club award – he definitely deserves it, and it would also be a fitting tribute to the good judgement of the New York Times.