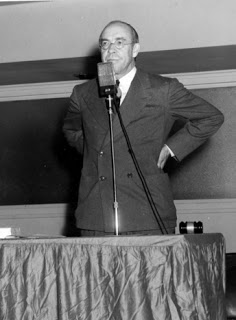 Stanton Griffis (1887–1974) had a long career as Ambassador to Poland, Egypt, Argentina and Spain, in addition to having been a top executive at Brentano’s, Paramount Pictures and Madison Square Garden.

In his wonderfully named memoir, Lying in State, he publishes a series of autobiographical letters he wrote while in these positions. While he was hardly a Zionist, and he had sme harsh words for the Israeli side as well, here are two notable excerpts from his letters, both written apparently in 1949.

The Jews were righting an Arab world torn by jealousies and hatreds, and the result was for good or for evil; I hope, for good. ….

The Arab armies were small and untrained. I asked my senior military attache to tell me the size and strength of the army of one of the small Arab countries. He may have been a bit cynical, but his answer was, “They have about five thousand men under arms, about half of them are usually absent without leave, and the other half are looking for them. When they find them they change places.”

They had no real will to fight. The Arabs were not impelled by the urge to defend this homeland as the Jews were. And so the world witnessed the astonishing situation in which fewer than one million Jews were victorious against a Moslem world of two hundred and eighty millions.
The result is part of the new map of Europe today.
====================================

Touring Tel Aviv and Jewish-held Jerusalem, it is not difficult to see why the crusading, organized and hard-working Jews have been able to defy the whole Arab world with its laziness, its corruption, its dreamy philosophies, and its fantastic mixture of great wealth and hideous poverty. Tel Aviv and Jewish-held new Jerusalem constitute a land of milk and honey, of organization, of modernism; that contrasts sharply with the Arab cities of approximately the same size and particularly with Old Jerusalem held by the Arabs and the site of the holy places of three out of the four great world religions.

“In my book,” it is certainly a mistake for the Christian tourist to visit Old Jerusalem. The Via Dolorosa, along which Christ was supposed to have carried His cross, is a horror of filthy, stinking Arab shops, little improved, I think, as to sanitation, ptomaine or literacy during the past 2,000 years. The Church of the Holy Sepulchre and Calvary are beset with commercialism and dirt and I am still sufficiently naive to want to keep my childhood illusions about Jerusalem. I will take a De Mille picture or a Sunday school colored picture of the old days rather than see it as it really is. On the other hand, while, of course, the Jewish wailing wall is deserted, the Moslem mosques are clean and well kept. I devoutly hope that some day some great world organization such as Lawrence Langner has visualized will make it their work to restore Old Jerusalem to a semblance of beauty. Call it what you will, or be of what religion you may, the beautiful illusion is better to create faith than the stinking reality which is the Via Dolorosa today. Langner’s idea would be a modern drive of the smelly money changers from the temple.

…
In this specific problem of the Near East I earnestly hope that when the bitterness and enmities die down, the Jews and the Arabs will trade together, that the Jews will be reasonable in their territorial aspirations, and that the Arabs will forget for all time their fanatical leanings towards “Holy War.”