TOP NEWS
http://elderofziyon.blogspot.com/2016/07/the-jews-are-our-misfortune-21st.html
By Petra Marquardt-Bigman
The slogan “Die Juden sind unser Unglück“ – i.e. “The Jews are our misfortune“ was popular in Nazi propaganda. It appeared prominently on displays of the weekly magazine “Der Stürmer” and was regularly printed at the bottom of the publication’s title page. 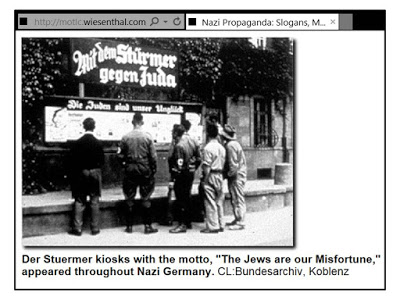 Quite obviously, this slogan could also serve as a concise summary of the antisemitic world view: whatever is wrong or bad in your life and in your world must somehow be the fault of the Jews. The Hamas Charter reflects this view perfectly in Article 22, illustrating at the same time how the Nazi slogan was adapted for contemporary politics with an updated version: “The Jewish state/Zionism is our misfortune.” While the relevant paragraphs clearly echo popular anti-Jewish stereotypes about scheming Jews with lots of money and monstrously evil designs, they are also a bit evasive about who exactly “the enemies” are, though the parts I emphasized (bold & underlined) are clear enough:
“For a long time, the enemies have been planning, skillfully and with precision, for the achievement of what they have attained. They took into consideration the causes affecting the current of events. They strived to amass great and substantive material wealth which they devoted to the realisation of their dream. With their money, they took control of the world media, news agencies, the press, publishing houses, broadcasting stations, and others. With their money they stirred revolutions in various parts of the world with the purpose of achieving their interests and reaping the fruit therein. They were behind the French Revolution, the Communist revolution and most of the revolutions we heard and hear about, here and there. With their money they formed secret societies, such as Freemasons, Rotary Clubs, the Lions and others in different parts of the world for the purpose of sabotaging societies and achieving Zionist interests. With their money they were able to control imperialistic countries and instigate them to colonize many countries in order to enable them to exploit their resources and spread corruption there.
You may speak as much as you want about regional and world wars. They were behind World War I, when they were able to destroy the Islamic Caliphate, making financial gains and controlling resources. They obtained the Balfour Declaration, formed the League of Nations through which they could rule the world. They were behind World War II, through which they made huge financial gains by trading in armaments, and paved the way for the establishment of their state. It was they who instigated the replacement of the League of Nations with the United Nations and the Security Council to enable them to rule the world through them. There is no war going on anywhere, without having their finger in it.” 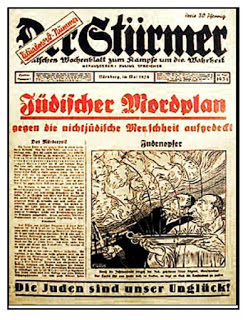 Indeed, a “Stürmer” cover from May 1934 that features a story about a murderous Jewish plan targeting all non-Jews would make a good illustration for this section of the Hamas Charter.
Even though it should be obvious enough that the Nazi slogan has been updated to “The Jewish state/Zionism is our misfortune,” there are endless debates about how to define contemporary antisemitism, and the question what, if any, anti-Israel activism should be regarded as antisemitic remains particularly contentious. But as I have argued elsewhere, there are countless examples that illustrate “that antisemitism is not a bug, but a feature of BDS: if your mission is to mobilize public opinion against the world’s only Jewish state in order to bring about its elimination, you will inevitably end up producing new versions of the Nazi slogan ‘The Jews are our misfortune.’”
Indeed, if one had to describe the output of professional anti-Israel activists like Ali Abunimah or Max Blumenthal and the sites they are associated with in one sentence, the most fitting one would be: “The Jewish state/Zionism is our misfortune.” And their audiences are certainly getting the message, as illustrated nicely in one minor recent example: in the wake of the coup attempt in Turkey, Twitter user Hadi Syed saw an article in Ha’aretz that emphasized that one of the suspected coup leaders had served as Military Attaché to Israel from 1998 to 2000. So Syed promptly tweetedthe article and tagged Max Blumenthal and Ali Abunimah, because he apparently knows full well that they are always interested in an Israeli angle if anything untoward is going on anywhere in the world.
Syed made a good bet: even though he has only 166 followers, his tweet got 95 re-tweets and 39 “Likes,” doubtlessly boosted by a retweet from Max Blumenthal as well as Ali Abunimah’s posting of the tweet together with the remark “Interesting.”
While Blumenthal and Abunimah may not find it worthwhile to promote this particular conspiracy theory now that the Hamas-friendly Islamist government in Turkey is mercilessly wiping out its opponents, they have often been determined to promote even the most absurd conspiracy theories in order to demonize Israel as the cause of everyone’s misfortune. One notable example is their promotion of utterly baseless claims that US police forces are brutal and abusive because they are inspired and trained by Israel. This particular subject is the specialty of their esteemed colleagueRania Khalek, who has produced numerous articles for Abunimah’s Electronic Intifada and other outlets implying that if it wasn’t for the world’s only Jewish state, the US and the world at large could be a much better place. The underlying message is indeed always the same: “The Jewish state is our misfortune.” And this lasting legacy of the “Stürmer” is by no means confined to the far-right. 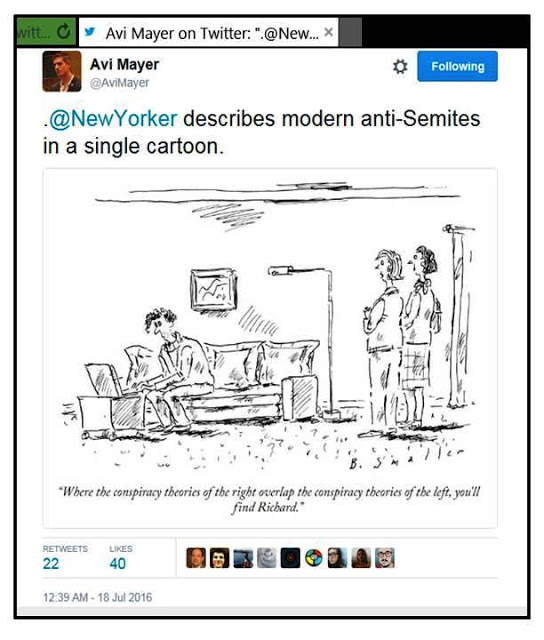