Wishing all readers of Point of No Return  Shana tova – Tiku leshanim rabot!

Tonight is the start of the two-day holiday celebrating Rosh Hashana – the Jewish New Year. At the beginning of the meal, Sephardim and Mizrahim have a special custom of reciting the Yehi Ratzones. Ty Alhadeff on the UW Stroum Jewish Studies site explains (with thanks: Michelle):

The Jewish people celebrate Rosh Hashana (pronounced Rosh Ashana among Sepharadim) every year starting the evening of the first day of the Hebrew month of Tishri. The Jewish New Year is celebrated in synagogues by hearing the shofar (ram’s horn) blasts and at home with a festive meal featuring symbolic foods, like apples dipped in honey for a sweet new year. 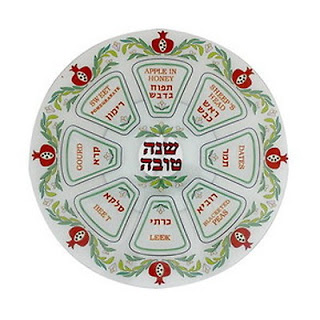 At the beginning of the holiday dinner, Sephardic Jews from the lands of the former Ottoman Empire have a special custom called the yehi ratzones, a series of symbolic appetizers including not only apples, but also dates, leeks, spinach, squash, black-eyed peas, and cheek meat of a cow or a fish head (the foods may differ between communities and be prepared in any number of ways). The symbolic foods represent, based on word play with Aramaic or Hebrew, a hope for the coming year, yehi ratzon meaning “may it be[God’s] will.”

For instance, dates symbolize the hope for the end of enmity against the Jews, as the Aramaic word for “date” is similar to a Hebrew word for “end.” The fish head or cheek meat symbolizes our hope that we may be the head, and not the tail. (See the order of the yehi ratzones in English, Hebrew and Ladino [in Latin script] according to the Sephardic customs as practiced in Seattle in Isaac Azose’s Mahzor Tefilah Le-David Le-Rosh Ashana.)

It is not entirely clear where the custom of the yehi ratzones originates, but food symbolism dates back to Talmudic times. In addition to the yehi ratzones, instead of dipping their bread in salt as is customary throughout the year, Jews dip their bread in honey or sugar on Rosh Ashana. In Rhodes, that sugar was kept throughout the year for various folk remedies. In her memoir I Remember Rhodes, Rebecca Amato Levy relates another interesting custom followed by this community in which they avoided wearing anything new on their feet including shoes, stockings, and slippers on Rosh Ashana.

Sepharadim greet each other with the Ladino expression Anyada Buena, Dulse i Alegre (“May you have a good, sweet and happy New Year”) or a Hebrew greeting, Tizku leshanim rabot (“May you merit many years”), to which one answers, Tizkeh vetihyeh ve-ta’arich yamim (“May you merit and live and increase your days”).