GAZA CITY — A new training regimen for fighters in Hamas’s armed wing employs slide presentations and a whiteboard rather than Kalashnikov rifles and grenades. The young men wear polo shirts instead of fatigues and black masks. They do not chant anti-Israel slogans, but discuss how the Geneva Conventions governing armed conflict dovetail with Islamic principles.

The three-day workshop, conducted last month by the International Committee of the Red Cross, followed numerous human-rights reports accusing both Israel and Hamas, the Islamist group that controls Gaza, of war crimes in their devastating battle last summer, and came as the International Criminal Court prosecutor conducts a preliminary inquiry into that conflict.

The Red Cross developed its program in conjunction with Islamic scholars several years ago, but ramped it up after last summer’s deadly battle. So far this year, it has conducted six sessions for a total of 210 fighters from Hamas’s Izzedine al-Qassam Brigades and two other Gaza armed groups. Another workshop is scheduled for this week.

...Red Cross leaders say they have seen an increasing commitment from Hamas leaders and linemen alike, if only because they now consider their international image a critical component of their struggle.

Mamadou Sow, who heads Red Cross operations in Gaza, said that in April he presented a critique of Hamas’s conduct during the 2014 hostilities to its top political and military leaders, and that they “welcomed it” and “indicated that they are a learning organization.”

“For the first time,” said Jacques de Maio, director of the Red Cross delegation in Israel and the Palestinian territories, “Hamas is actually, in a private, protected space, expressing a readiness to look critically at a number of things that have an impact on their level of respect for international humanitarian law.”

He added, “Whether this will translate into something concrete, time will tell.”

Hamas’ actions are predictable, but only to those who understand the honor/shame mentality. 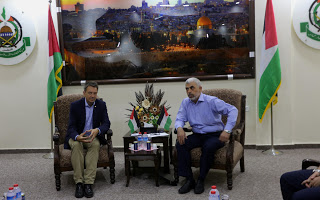 Which brings us up to yesterday:

The head of the International Committee of the Red Cross on Tuesday discussed the fate of two Israeli civilians and the remains of two Israeli soldiers believed to be held by Hamas in a meeting with the leader of the Islamic militant group.
Officials on both sides said the status of the missing Israelis was one of a host of issues discussed in the meeting between ICRC President Peter Maurer and Yehiyeh Sinwar, the Hamas leader in Gaza.
A Hamas official said that Maurer “heard the movement’s firm position” Tuesday. The official spoke on condition of anonymity because the meeting was closed.
Sinwar has said Hamas will not release any information about the missing Israelis until Israel frees 54 Palestinian prisoners who were re-arrested after being released in a 2011 prisoner swap.

Hamas has successfully learned the lessons taught by the ICRC. It is using the language of international law to insist that its prisons adhere to some sort of standard, but of course it will not allow the Red Cross to visit any actual Israeli prisoners.

The fundamental issue that Hamas has managed to obfuscate is that these “prisoners” are not prisoners – but hostages. The reason Hamas didn’t allow Maurer to speak with the Israelis who for whatever reason ended up in Gaza is because it wants to use them as bargaining chips to get Israel to release terrorists and achieve other goals, and even the promise of showing proof of life is something that Hamas sees as something to be bartered..

Hostage-taking, of course, is a grave violation of international law. But Maurer, as far as we can tell, never uttered the word “hostage” to Hamas – but Hamas pretends that these Israelis are prisoners of war, or criminals.

If Maurer would have spoken out loud, ahead of the meeting, about how these Israelis are hostages and hwo the very act of demanding something for their return is illegal under international law, he could have made a difference – because Hamas would have been shamed and it seeks to avoid shame. But instead Maurer treated Hamas with respect (=honor) and Hamas now has less incentive to adhere to international law.

For Hamas and other members of the shame culture, it is all about appearances, not ethics. Maurer’s meeting with Sinwar enhanced Hamas’ standing in its eyes – photos of the meeting are featured in Hamas’ website – but the issues are only meant to be manipulated to Hamas’ advantage, not to be taken seriously.

For Hamas to change, it has to be shamed. The ICRC did the opposite, making Sinwar look like a world leader while getting nothing in return.