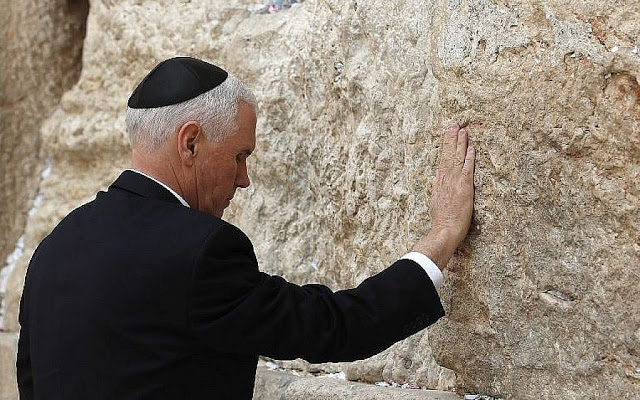 Every story I read about Vice President Pence’s visit to the Kotel (Western Wall) included how upset female reporters were for being stuck in the women’s section of the plaza, where they could not as easily take photos because the men were closer and blocked their view.

NPR and the Washington Post had entire stories about this.

They are right to be upset. They are wrong to be so upset.

Under normal circumstances, the main plaza of the Western Wall is a synagogue that follows Orthodox practice. Observing the rules of the area is to be expected. There is a balance between freedom or religion and equal rights.

In my opinion, during Pence’s visit, the Kotel was not a synagogue. All Jewish worshipers were barred from the area for four hours for security purposes.

There is no Jewish legal reason to separate the men and the women when the Wall is a prop for a photo op. Many (but not all) Orthodox synagogues regularly allow men and women to sit in the main sanctuary when there is a lecture  or similar event.

But the people who run the Kotel are allowed to enforce rules that go beyond the letter of the law. They may be worried about a slippery slope, given the controversies around egalitarian prayer in the area in the past several years.  It might not be wise, and I don’t think it is necessary, but forcing them to change their policies for a photo op is not much better than clearing the area of worshipers for a photo-op.

The coverage of the women’s anger, though, is over the top. It is worth mentioning as a sidelight, but to have entire stories about it makes one think that the editors are looking for a juicy reason to trash Israel (and smear Pence by association.

I do not recall a single article, ever, about how difficult it is for women reporters to do their jobs in Saudi Arabia. And they have severe restrictions:


Women traveling alone are not allowed to enter the country unless they will be met at the airport by a husband, a sponsor or male relative. The Saudi Embassy advises women to dress conservatively in public; that means wearing ankle-length dresses with long sleeves and not pants. In many areas, particularly the capital, Riyadh, women are pressured to wear a full-length black covering called an abaya and to cover their heads. Women in restaurants not accompanied by a male relative often are not served, and religious police known as the Mutawwa travel in public watching for violations of social mores. Any public display of affection is considered offensive. A woman traveling with a man who is not her husband, sponsor or a male relative can be arrested.

But women who are restricted, rightly or wrongly, from covering a relatively unimportant story have made this into a big deal.

And when Nikki Haley visited the Wall, she stayed on the women’s side with the other worshipers. Female photographers – who were also segregated from men – had the best shots.

If gender segregation is so evil and anti-democratic, then why didn’t anyone complain about the preferential treatment that women received at the exact same spot?

This is a tempest in a teapot, and it is driven more by politics than by news.

UPDATE: One female reporters says that the system was rigged in favor of males when Haley visited:

When Nikki Haley visited the Wall, coverage access was also rigged to favor male reporters. Until Israeli news orgs & professional Israeli journalist orgs take gender discrimination seriously, or until we force them to so, we will continue to be in the back row. @NTarnopolsky

I found more pictures of Haley from women than men, so I don’t know.

UPDATE 2: A tweet from Jacob Kornbluh shows that male reporters were stuck behind a partition as well when Hilary Clinton visited the wall.

Shame that the male reporters were “forced” to stand behind a fence to cover Hillary’s visit to the Western Wall 🤪 pic.twitter.com/fJqruX5Zbf