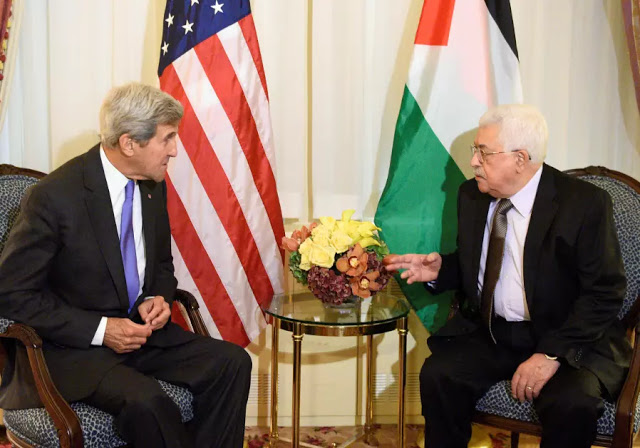 
While the White House confirms that since the “Jerusalem Declaration” there has been a complete disconnect between the Palestinian Authority and the Trump administration, it turns out that the previous administration actually maintains contact with PA officials. Ma’ariv reported that former US Secretary of State John Kerry met in London with a close associate of Palestinian Authority President Mahmoud Abbas, Hussein Agha, for a long and open conversation about a variety of topics. Agha apparently reported details of the conversation to senior PA officials in Ramallah. A senior PA official confirmed to Ma’ariv that the meeting took place.

During the conversation, according to the report, Kerry asked Agha to convey a message to Abbas and ask him to “hold on and be strong.” Tell him, he told Agha, “that he should stay strong in his spirit and play for time, that he will not break and will not yield to President Trump’s demands.” According to Kerry, Trump will not remain in office for a long time. It was reported that within a year there was a good chance that Trump would not be in the White House.

Kerry offered his help to the Palestinians in an effort to advance the peace process and recommended that Abbas present his own peace plan. “Maybe it is time for the Palestinians to define their peace principles and present a positive plan,” Kerry suggested. He promised to use all his contacts and all his abilities to get support for such a plan. He asked Abbas, through Agha, not to attack the US or the Trump administration, but to concentrate on personal attacks on Trump himself, whom Kerry says is solely and directly responsible for the situation.

According to the report, referring to the president, Kerry used derogatory terms and even worse. Kerry offered to help create an alternative peace initiative and promised to help garner international support, among others, of Europeans, Arab states and the international community. Kerry hinted that many in the American establishment, as well as in American intelligence, are dissatisfied with Trump’s performance and the way he leads America. He surprised his interlocutor by saying he was seriously considering running for president in 2020. When asked about his advanced age, he said he was not much older than Trump and would not have an age problem.

In a report on the conversation, Agha said that Kerry appears to be “crazy about things,” very energetic, and someone who is yearning to help realize the dream of peace between Israelis and Palestinians. Kerry explained, according to the report, that even in the Republican Party they do not know what to do with Trump and are very dissatisfied with him and that patience and breathing time are needed to get through this difficult period.

Trump’s Middle East decisions are arguably the best and most effective moves he has made since becoming President. But they are dependent on forcing the Palestinians to recognize reality, and to stop their fantasies that they can achieve a state without negotiations and without Israeli cooperation.

John Kerry is acting to undermine his president and US national interests, apparently in a delusional effort set himself up for another presidential run. He is giving support for Abbas’ intransigence.

Kerry actually believes that he is the messiah who can bring peace, and he is willing to undercut his own country’s diplomatic efforts to do so.

This is even though his efforts in the past showed that Abbas is the one who is not interested in peace. Kerry  knows this as well as anyone. Yet now we know that Kerry is actually encouraging Abbas to be intransigent, to act against the wishes of not only the US but much of the Arab world, and to continue to hold his own people hostage in order to avoid negotiations and compromises for peace.

People say, for good reason, that Trump often appears to set aside US interests for his own ego. John Kerry is doing exactly that, today. But he won’t be criticized for it.