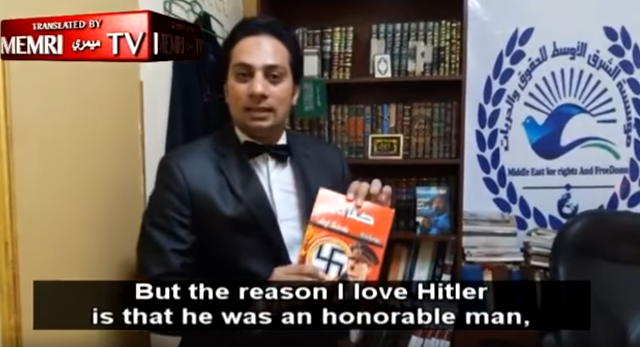 Hany Elsadek is the head, and possibly the only member, of the “Moyen-Orient des droits et libertés” human rights group in Egypt.

Its Facebook page shows that it sometimes gives out human rights awards, or adds its name to sponsors of small conferences. For the most part, the organization seems to be a scam, with no webpage of its own and only Elsadek being seen on its Facebook page.

I really need to learn how to start a human rights NGO so I can get funding for doing nothing.

Anyway, this “human rights activist” also happens to be a big fan of Adolf Hitler. And not only because he got the trains to run on time.

In October, he said on video:


“In the name of Allah the Merciful, the Compassionate. This is an instructive attempt to correct false notions. Why is the media hostile to someone whom they label an arch-killer – Hitler? Why Hitler, of all people? There have been many such criminals throughout history, so why was Hitler specifically labeled a killer, a murderer, a criminal, and so on?

“The problem is that Hitler was the only one who confronted two power hubs – the socialist Communists and the Jews. Hitler believed that they posed a great danger to his country, Germany. When Hitler killed or burned some 4,000-5,000 Jews, the Jews inflated the number and said that six million were burned – not 4,000 or 5,000. Secondly, Hitler attacked the greatest superpowers of that time, England and France, and started taking over their lands, posing a threat to the thrones of other countries. He became a bogeyman in their eyes.

“But what Hitler did is no worse than what France did in Algeria. It’s no worse than what Begin did to the Palestinians, or what Moshe Dayan or Napoleon did. But Hitler became a specific target because he alone exposed the truth about the Jews. He wrote in his memoirs: ‘They call themselves the Chosen People, while they spread prostitution in secret.’ This is just a short presentation about this great man, Hitler, who loved his people and his country. We should all read Hitler’s life story so that we will know the truth, and realize that the terrorism of the Jews, through their media, is distorting the image of Hitler. Thank you, and goodbye.”

When MEMRI exposed his admiration, he doubled down and made another video about how great Hitler is for exposing how evil Jews are.