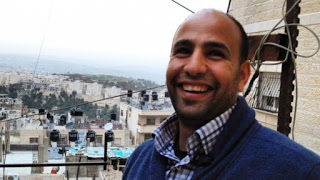 The New York Times has a long Sunday magazine piece about how terrible life is in the Shuafat neighborhood and camp, which is within Jerusalem’s city limits but outside the separation barrier.


So few nonresidents enter Shuafat that my appearance there seemed to be a highly unusual event, met with warm greetings verging on hysteria, crowds of kids following along. “Hello, America!” they called excitedly. I was a novelty, but also, I was with Baha Nababta, a 29-year-old Palestinian community organizer beloved by the kids of Shuafat. Those who followed us wanted not just my attention but his. Baha had a rare kind of charisma. Camp-counselor charisma, you might call it. He was a natural leader of boys. Every kid we passed knew him and either waved or stopped to speak to him. Baha founded a community center so that older children would have a place to hang out, because there is no open space in Shuafat Refugee Camp, no park, not a single playground, nowhere for kids to go, not even a street, really, where they can play, because there are no sidewalks, most of the narrow roads barely fitting the cars that ramble down them. Younger kids tapped me on the arms and wanted to show me the mural they painted with Baha. The road they helped to pave with Baha, who supervised its completion. The plants they planted with Baha along a narrow strip. Baha, Baha, Baha.

It was like that with the adults too. They all wanted his attention. His phone was blowing up in his pocket as we walked. He finally answered. There was a dispute between a man whose baby died at a clinic and the doctor who treated the baby. The man whose baby died tried to burn the doctor alive, and now the doctor was in critical condition, in a hospital in Jerusalem. Throughout the two days I spent with Baha, I heard more stories like this that he was asked to help resolve. People relied on him. He had a vision for the Shuafat camp, where he was born and raised, that went beyond what could be imagined from within the very limited confines of the place.

….I got the impression Baha was something like an informal mayor, on whom people depended to resolve disputes, build roads, put together volunteer committees and try to make Shuafat safe for children.

Readers of EoZ would have known the emotional punchline of the story before the author, Rachel Kushner, got to it. Because this was one of the very few sites, in English or in Arabic, that highlighted the story of Baha Nababta’s murder.

As I wrote then, Nababta was a true Palestinian hero. He worked tirelessly to improve the lives of his community. Yet his death was barely mentioned in Palestinian media, because he wasn’t “martyred” trying to kill Jews.

Kushner mentioned that Nababta told her that he was threatened, and that she would never have written about the threats if he hadn’t been killed:


Later I told myself and everyone else how wonderful it was in the Shuafat camp. How safe I felt. How positive Baha was. All of that still feels true to me. But I also insisted, to myself and everyone else, that Baha never expressed any fears for his own safety. In looking at my notes, I see now that my insistence on this point was sheer will. A fiction. It’s right there in the notes. He said he was nervous. He said he’d been threatened.

Also in my notes, this:

1. Those who want to help make a better life

2. Those who want to destroy everything

I had guessed in my tribute to Baha that he might have been killed by people who were upset at his speaking to Israelis to help improve the camp, the crime of “normalization.” Kushner indicates that Baha’s enemies were less ideological – they were simply criminals and his efforts to clean up the town hurt their profits.

Two men were arrested in August for the murder, but I have not yet heard what their motives were.

Whatever the reason, though, the story that Kushner missed was how people like Baha Nababta are not the role models that Palestinian Arab youngsters are taught about in their schools. He is not the type of martyr that Mahmoud Abbas will extol in speeches. His very desire to improve people’s lives is what made him a target and ultimately a victim.

This is the real story, a story that the New York Times and the other media, Western or Arab, will not normally mention.