As I showed yesterday, Louis Farrakhan gave a nationally-televised speech, promoted by Diddy, that has at least a half dozen antisemitic parts. (I didn’t include them all – he also said that he told God to give Floria the coronavirus because Cuba’s Jews fled to Florida and hurts US relations with that country. Really.)

What did the socialist Left, which pretends to be so much against antisemitism, say?

Instead, IfNotNow posted an old clip of a Jew interrupting a Nazi party event in New York, pretending to be as brave as he was.

I pointed out that they aren’t brave – they are cowards.

And you are SILENT when Louis Farrakhan spouts the exact same kind of hate. You MINIMIZE when Roger Waters says the same thing. You HATE when Jews defend themselves. Stop pretending you give a damn about antisemitism. You enable it, you @IfNotNowOrg hypocrites.

Ooooh, you are against Nazis. How brave. What about when your political allies are antisemites? Then you turn into cowardly silent sheep. Screaming you care about “justice” and “racism” but allowing your pals to crap all over Jews. You are contemptible.

Your hate for Nazis doesn’t overcome your tolerance for a Nazi admirer. 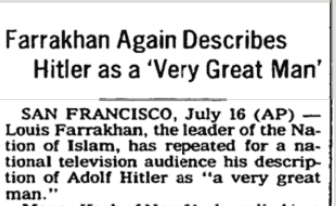 Here’s the biggest piece of hypocrisy imaginable from people who are silent (or tacitly encourage) antisemitism from Arabs and Nation of Islam and Leftists.
When you actually grow some balls, give real Jews a call. Until then, don’t pretend you represent any of us.

Of course, they didn’t answer. They cannot. They know they are cowards, pretending that fighting against Zionists – who won’t do anything to them – is bravery. If they would speak out against the Nation of Islam or Roger Waters, though, people on their side will denigrate them and they cannot even handle insults from their compatriots.

How very brave they are. They choose to condone antisemitism rather than risk their position as solidly socialist anti-Zionist and “woke.”

The few times that they’ve mentioned Farrakhan it has always been in the context of downplaying his antisemitism and its importance. One example:

Not once have they condemned Farrakhan without “context” meant to minimize his hate and danger.

The Jersey City murderers who espoused Farrakhan’s philosophy didn’t move them at all.

And the same goes for all the people who insist they are against antisemitism as well as Zionism. In the end the Linda Sarsours and Ali Abunimahs and Rashida Tlaibs are all on the same side as the Arab, and black, and Leftist antisemites.

They let their own Jew-hatred slip through often enough.