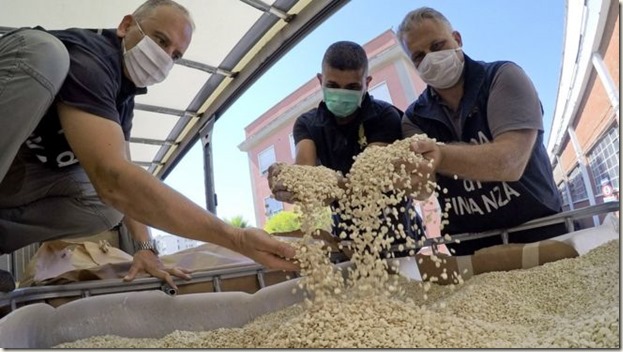 Italian police have seized what they believe is a world-record haul of 14 tonnes of amphetamines they suspect were made in Syria to finance the jihadist group Islamic State (IS).

About 84 million counterfeit Captagon pills worth an estimated €1bn ($1.1bn; £0.9bn) were found in containers at the port of Salerno.

They were hidden inside large drums of paper and gear wheels.

Officers are looking into whether local Camorra crime groups are involved.

Captagon is a brand name for the synthetic stimulant fenethylline. It was originally used to treat attention deficit hyperactivity disorder (ADHD) and narcolepsy, but many countries banned it during the 1980s because of its addictive properties.

The drug has also been consumed by combatants in the civil war in Syria, including IS militants, who value its ability to inhibit fear and ward off tiredness.

Syria is believed to be the biggest producer and exporter of counterfeit Captagon.

Lebanon’s Al Modon says that Hezbollah is known to be a major partner with Syria for distributing this illegal drug.

The production and smuggling of drugs from Syria to the countries of the world is not limited to the partnership between the Assad regime and the Lebanese Hezbollah, which has long sales in this field; it is widely believed that the Russian mafia is in close relationship with such operations that used to flood the European market with drugs coming from India, Afghanistan and Pakistan, and currently from Syria and Lebanon. This is after the Russian mafia benefited from the Russian influence, which has become strong on the eastern and southern Mediterranean coasts, and the costs of producing and shipping drugs from Syria to Europe have decreased.

Information shows that Samer al-Assad, Bashar’s cousin, is primarily responsible for the manufacture and trade of drugs, and runs the system’s operations in cooperation with Hezbollah and the Russian mafia.

This confirms the third face of Hezbollah, alongside its two known faces in Lebanon: the political side , and the military-security side.The third side is the manufacturing of Captagon, cultivating the plants from which drugs are made, trafficking cocaine and heroin, and smuggling goods, medicines and food through dozens of land crossings between Syria and Lebanon, and through the Beirut Port and Rafic Hariri Airport, and money laundering.

The article goes on to compare how Hezbollah is like the other organized crime cartels worldwide; hiding their activities under social programs, using strong family and ethnic connections to maintain an atmosphere of secrecy, flourishing in weak states.