On Tuesday evening, I checked out the protest by BDSers outside the Joyce Theater in New York where Israel’s Batsheva Dance Company was to perform.

The BDSers had a small band and one person would start a responsive verse about some trendy intersectional issue interspersed with verses about “Israeli apartheid” that would be repeated by the 15 or so drones.

It was pretty boring. 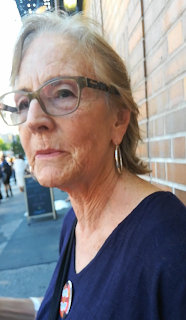 I spoke to one lady handing out flyers with typical anti-Israel lies, and asked her if I can ask her a few questions. I asked if she was anti-Israel or pro-Palestine, and she said she wasn’t anti-Israel at all. Then I asked her what about the slogan “from the river to the sea, Palestine will be free” and she answered that she wanted a single democratic state (obviously not Israel.) I then asked her if she was against a Jewish state, and she said she didn’t want Israel to be like Iran where there is a state religion (which Israel doesn’t have.) When I asked her about every Arab state save Lebanon that says they are Muslim states in their constitutions, she claimed I was wrong and then called over one of the others because she realized she was in way over her head. They told her not to talk to me.

The JDL was there doing a counter-demonstration. while I thought that people holding signs saying “Punish Gaza” do not do anything at all positive for Israel, Zionism or Jews, at least they countered the other hate.

Police barricades were up to make sure that theatre-goers wouldn’t be harassed. I didn’t stay until the box office opened.