I’ve been looking a lot at statistics about the pro-Israel lobby over the past couple of days. The major database that follows the money, OpenSecrets, provides a wealth of information about all lobbies, lobbyists, lobby groups, contributors and more.

In 2018, OpenSecrets ranks the pro-Israel lobby as #50 among all categories in amounts contributed to politicians, with nearly $15 million given.

However, that number is deceptive, because it includes J-StreetPAC as “pro-Israel.” And J-StreetPAC was by far the largest contributor to the category. 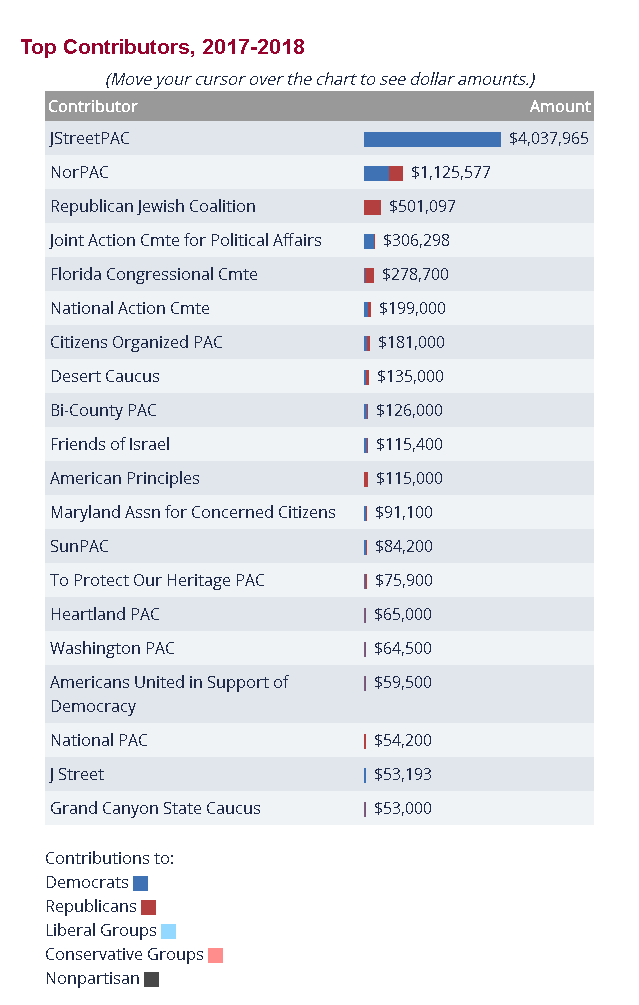 OpenSecrets categorizes J-Street and J-StreetPAC as “pro-Israel” since it doesn’t fit under any other category and claims to be pro-Israel.

Antisemites know that it isn’t. More on that below.

J-Street has, to my knowledge, never supported a single bill in Congress that was also supported by the State of Israel.

The entire calumny against the “Israel lobby” is that Jews are more interested in supporting Israel than the US, that Jews have dual loyalties, that Jews dance to the tune of the Israeli government and Zionist leaders. But no one accuses J-Street of doing any of that.

This means that the pro-Israel lobby isn’t even close to the top fifty of all interest groups that contribute to politicians. And OpenSecrets only tracks about 80 interest groups!

The pro-Israel lobby is not important at all compared to the hundreds of millions that are thrown around candidates to office.

Don’t take my word for it that J-Street isn’t pro-Israel.

Alison Weir and her organization “If Americans Knew” (“What every American Needs to Know about Israel/Palestine”) are antisemitic. Even Jewish Voice for Peace   and the main US BDS group have distanced itself from Weir for her bigotry.

Her site has an article she wrote, updated in 2017, called “Introduction to the Israel Lobby.” It is a scattershot article listing not only pro-Israel political organizations but also general pro-Israel and Jewish organizations (like Bnai Brith) that she considers to be part of this insidious “lobby.” Israeli-owned companies are listed. Even journalists like Jeffrey Goldberg are listed there as part of this insidious “Israel lobby.”

But J-Street is nowhere to be seen on her list.

The single largest “pro-Israel” contributor to influence American policy in Congress is not listed by an organization that is dedicated to exposing Jewish and Israeli influence on American politics.

That tells you all you need to know about J-Street’s “pro-Israel” credentials.