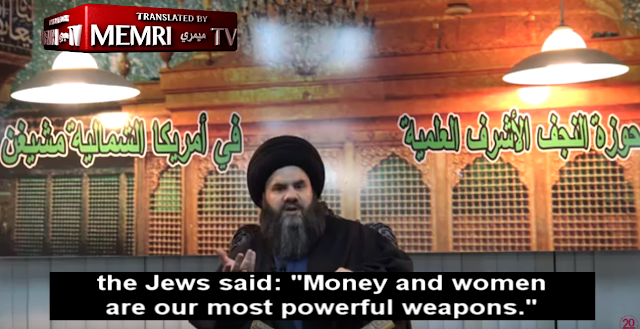 Al-Sheraa, a Shiite, said (among other things)  that Jewish women have historically established and managed “dens of female iniquity” and headed the brothels of Europe. He added that the Jews allow their faith to be passed down maternally so that their women could increase the Jewish population through prostitution.

I tweeted this to the Detroit News and the Detroit Fox channel, assuming that local media might be interested in a thoroughly antisemitic imam in their city. Yet there are no stories today about Al Sheraa in Detroit media. The only places I see coverage are the Cleveland Jewish News (via JNS)  and FrontPage, plus Mexico’s Diario Judio.

One would think that an antisemitic imam publicly spouting hate would be a little newsworthy. Perhaps the Detroit media is too cowed by the large Muslim population to want to touch the story.

Here is the video and transcript from MEMRI:

“[The Jews] Employ Tricks And Fraud In Matters Of Religion And Moral Values”
Bassem Al-Sheraa: “Yahya [John the Baptist], with all his greatness and his glory, was a prophet, as was his father… [The Jews] excommunicated him and then sanctioned his killing. He wasn’t just killed – he was declared a heretic and his head was chopped off. Jesus, son of Mary, was also declared a heretic by them. They excommunicated him. They said that he was not a Jew. Then the Romans killed him. They arrested him in order to crucify him. But it was the Jews who issued the religious ruling about it. The Roman ruler… When the Romans wanted to arrest Jesus, they got a religious ruling from the Jews that said that he did not represent them and that he had been excommunicated. The Jews sanctioned his killing.
[…]
“[The Jews] employ tricks and fraud in matters of religion and moral values. They distort [sacred texts], and therefore it is said that the Jews would often kill their own prophets. They would sanction the killing of one another. In addition, they allowed their women to engage in prostitution, God forbid. Following the [Babylonian] captivity, when Nebuchadnezzar exiled them and destroyed the Temple, the Jews said: ‘Money and women are our most powerful weapons.’

“So they would amass gold and money, and they would spread usury. Usury constitutes a peculiar Jewish philosophy… Even in the modern world, global banks are based on the culture of usury, which is a Jewish concept. Since a long time ago, the Jews have been lending people money and collecting interest, even though it is forbidden according to their religious law. Allowing usury is one of the things they did to circumvent their [scriptures]. The Jews permitted usury and have been usurers. They are still proud of this. Look at the global banks, the billionaires… All those are from among [the Jews]. Their culture is a culture of usury.

“The financial culture of the world was founded according to their instructions and their vision. Why? Because they consider [usury] to be an instrument of control.”

Videos like this are published by MEMRI every day. But it is not nearly as usual to see Ilamic religious leaders in the US or Canada being publicized with the same hate that one sees all the time in the Middle East.

If the US political parties and media are as concerned about antisemitism as they all swear they are, then this should be a front page story. The fact that it isn’t indicates that much of the outrage we see when stories like Ilhan Omar come up is not real.