On Sunday, The ADL’s Jonathan Greenblatt joined in the furor over The New York Times’ antisemitic cartoon — and Greenblatt didn’t hold back. 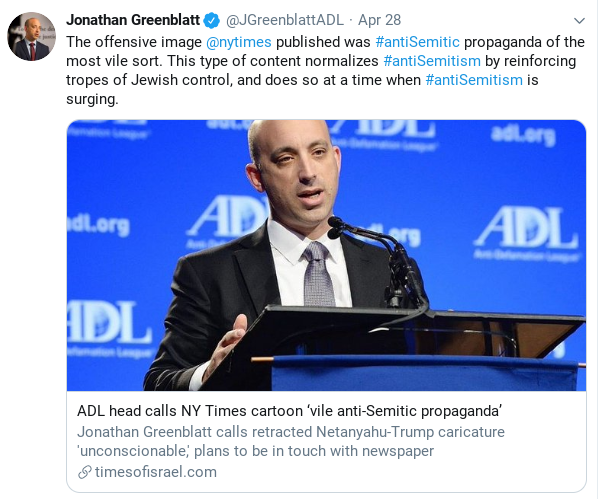 Greenblatt went further, calling out The New York Times for “a moral failing of major proportions” — and the need for accountability and action 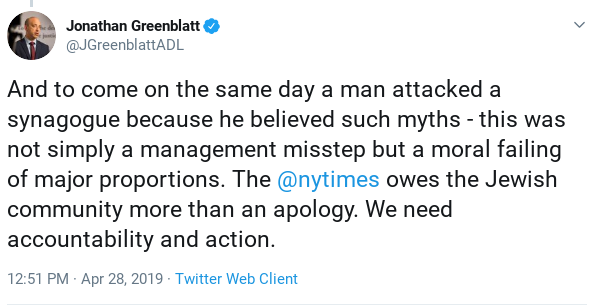 He concluded with recommendations, including that a review of policy is necessary: 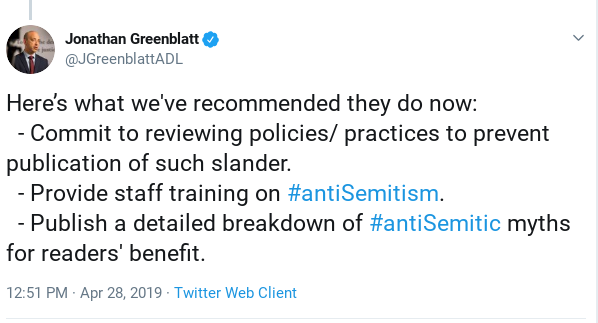 The fact that Greenblatt and the ADL stepped in is important. It shows that at a time when accusations are flying back and forth accusing either the left or the right of being the main cause of the rise of antisemitism in the US, the ADL takes a balanced approach and rises above the fray, addressing the incitement of hate wherever it sees it.

If only Greenblatt could spot racism when he encounters it face to face. 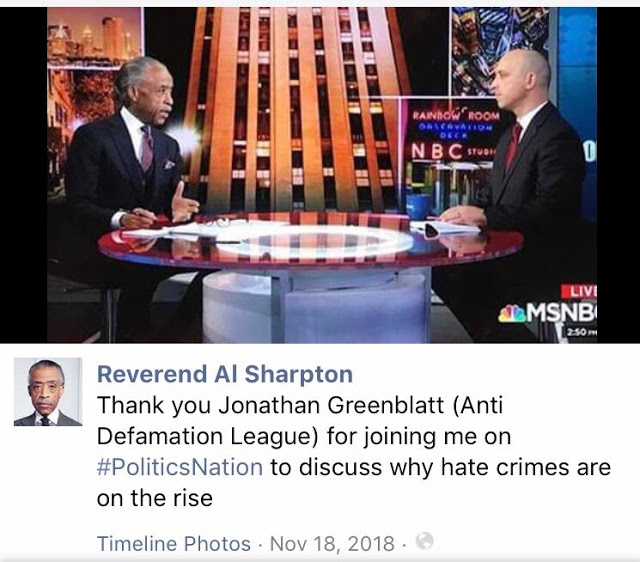 On the one hand, who better to go to for pointers on hate crimes than Al Sharpton – After all, Sharpton has a history of inciting hatred.

Putting aside Sharpton’s central role in the Tawana Brawley hoax, Sharpton’s history of deliberately inciting hatred against Jews is well established.
In 1991, after a Hasidic Jewish driver in Crown Heights accidentally killed Gavin Cato, a 7-year-old black child, antisemitic riots erupted. At the funeral, Sharpton made a point of inflaming the crowd, blaming the “diamond merchants” (Jews) with “the blood of innocent babies” on their hands. Going further, Sharpton then mobilized hundreds of demonstrators on a march through the Jewish neighborhood, chanting, “No justice, no peace.” There, Yankel Rosenbaum, a rabbinical student, was surrounded by a mob shouting “Kill the Jews!” and was stabbed to death.
The Forward quotes comments by Sharpton at the time that could easily be mistaken for the racism spewed by Farrakhan:


The world will tell us [Cato] was killed by accident. Yes, it was a social accident…It’s an accident to allow an apartheid ambulance service in the middle of Crown Heights…Talk about how Oppenheimer in South Africa sends diamonds straight to Tel Aviv and deals with the diamond merchants right here in Crown Heights. The issue is not anti-Semitism; the issue is apartheid…All we want to say is what Jesus said: if you offend one of these little ones, you got to pay for it. No compromise, no meetings, no kaffe klatsch, no skinnin’ and grinnin’. Pay for your deeds…It’s no accident that we know we should not be run over. We are the royal family on the planet. We’re the original man. We gazed into the stars and wrote astrology. We had a conversation and that became philosophy. We are the ones who created mathematics. We’re not anybody to be left to die waiting on an ambulance. We are the alpha and omega of creation itself. [emphasis added]

A few years later, in 1995, Sharpton got involved in the protests against Freddy’s Fashion Mart and again raised tempers, warning “we will not stand by and allow them to move this brother so that some white interloper can expand his business.” Sharpton’s organization, National Action Network, set up picket lines. Customers who entered the store were spat on, cursed and accused of being “traitors” and “Uncle Toms.” Some protesters starting shouting, “Burn down the Jew store!” while simulating striking a match and Sharpton’s colleague Morris Powell saying “We’re going to see that this cracker suffers”. On December 8, one of the protestors entered Freddy’s, shot 4 of the employees and set the store on fire, killing 7 employees.

And it’s not as if Sharpton has lost his touch. More recently, Sharpton involved himself in the 2012 shooting of Trayvon Martin. Without verifying the facts, Sharpton publicly made a statement “that racial language was used” — a claim that an investigation proved false. Sharpton also exacerbated tensions by deliberately referring to Zimmerman as “white,” despite the fact that his mother is Peruvian.

But during their chummy get-together, Greenblatt doesn’t say a word about Sharpton’s background. These are just two activists fighting the good fight for human rights.


o  Here we have the ADL normalizing the vile antisemitism of Al Sharpton
o  It is the ADL, under Greenblatt’s leadership, that demonstrates “a moral failing of major proportions”
o  It is Greenblatt who should “commit to reviewing policies”

The question is how Sharpton gets away with this and has not only reinvented himself but is a figure that politicians come to in order to get his blessing. 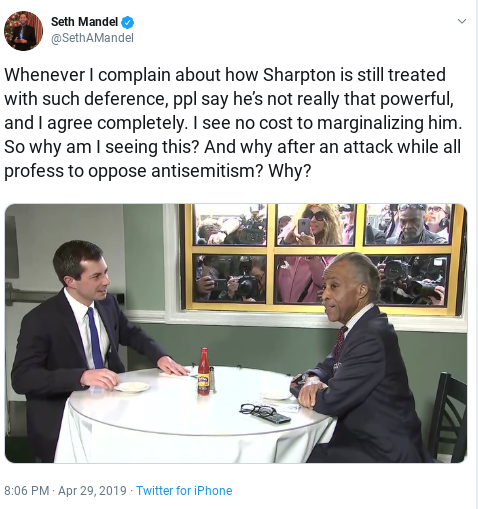 Whatever the reason, the impunity Sharpton enjoys has spread to a new generation that includes Sarsour, Mallory (a disciple of Sharpton), Omar and Tlaib. Their immunity to criticism and ability to claim they are instead victims of smears and incitement are all part of a growing trend in the incitement of racism and antisemitism in the US.

And the ADL is no longer the champion it used to be in this fight.