The 1967 Lines Are Sacrosanct Unless Palestinians Violate Them 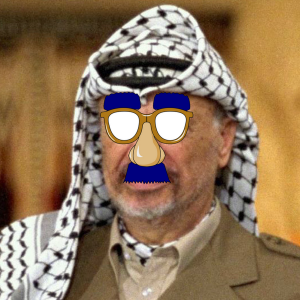 The position of the international community on the subject of the 1949 armistice lines between Israel and Jordan, and between Israel and Egypt, has long been clear: Israeli control of any territories beyond those lines constitutes an illegal occupation, and Israel’s permanent border must follow the lines on the armistice map that determined boundaries until the Six-Day War of 1967. Any Israeli activity beyond that frontier violates international law. When Palestinians do it in the other direction, however, as with the Great Return March in Gaza, that’s fine.
Under normal circumstances international law does not distinguish between an armed invasion or one that features no weapons; an organized crossing of an internationally recognized border without the consent of the government on the other side of that border constitutes a bona fide invasion. That much was established regarding Morocco’s annexation of Western Sahara. Masses of unarmed Moroccans simply marched across the border, set up settlements, and there we stand today, with the official position of international legal experts characterizing the influx of Moroccans as an invasion, the repulsion of which justified the use of lethal force. Sovereignty has value in international law.
But not for Israel, which is barred from preventing thousands of Gazans from destroying the border fence and entering pre-1967 Israel. In international law as practiced in modern times, Jewish sovereignty is not like other sovereignty. Other sovereign entities are entitled to protect their sovereignty, by lethal force if necessary, under all circumstances; the Jewish State, on the other hand, must bow to the will of genocidal hordes who have been taught from birth that Jews are inherently evil and must be destroyed. It’s the law.
Others may quibble about the current status of those lines given the possibility of a negotiated settlement between Israel and the Palestinians that might involve adjustment of the border, but the principle remains operative regardless of the final boundaries under any agreement. Case in point: the armistice was signed with Jordan, which has since renounced any claims to territory west of the Jordan River – and Israeli agreements with the Palestinians at Oslo only grant Palestinians self-rule in specific population centers of that territory. Nevertheless, the international community automatically sees Israeli control of the balance of the territory as a violation, because Jews. You know how it is.
One day a case might come before the World Court or the International Criminal Court that will formalize this principle and enshrine it in case law, but until then, it will have to be maintained through repetition: only Israeli actions have legal significance.