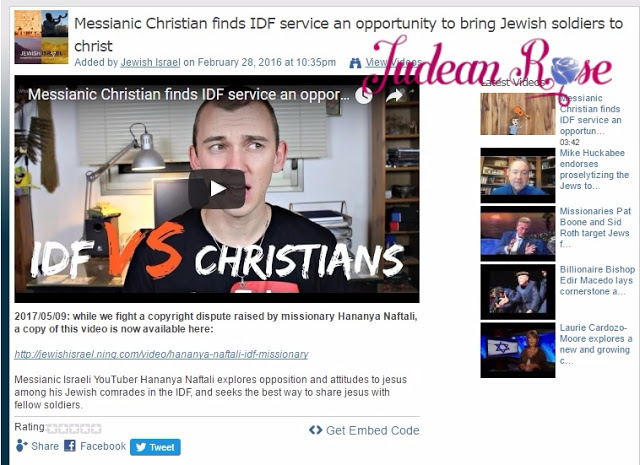 According to journalist Yanki Farber, Christian missionary Hananya Naftali has just been appointed Israeli Prime Minister Benjamin Netanyahu’s new deputy media advisor. This presumably means that Naftali will be managing or directing the prime minister’s social media accounts. As the Israeli PM has a significant online presence, this would seem to be a position of some consequence.

I’ve been aware of Naftali since at least 2015. Naftali previously served in the IDF Armored Corps, and used the close quarters of a tank to spread the word of Jesus (Y”Sh) to Jewish soldiers. He also made pro-Israel videos while wearing his IDF uniform. No one seemed to question his intent. People kept sending me his videos. “Isn’t he wonderful?” they’d gush.
As his social media presence grew, some pro-Israel organizations shared Hananya Naftali’s videos in support of Israel and wrote articles about him, too. In each video and article, I recognized certain code words suggesting Naftali’s true motive was to gain the trust of the Jewish people for the purpose of drawing them away from Judaism and persuading them to become Christians.
Because Naftali was a social media star whose videos were shared by pro-Israel organizations, in some ways, he was untouchable. I couldn’t write to expose him because it would be smearing pro-Israel organizations. It would be undiplomatic.
Writing to the pro-Israel organizations seemed to get me nowhere. I got the brush-off: “Nah. He’s not a missionary,” they swore.
But he was. Is.
The only thing I lacked was a big ole smoking gun, where Naftali would actually come right out and say: “I’m all about converting the Jews.”

In June 2017, I interviewedmy friend Shannon Nuszen, a blogger at Jewish Israel. As a former Christian missionary (now Orthodox Jew), Shannon knew the lingo. She’d been following Naftali’s antics for some time. With Shannon’s help, I laid out my case that Naftali’s seeming support for Israel in his popular videos serves as cover for his missionary work.

But we still hoped for that smoking gun, Shannon and I.

Some months later, Aussie Dave of Israellycoolfound it: the smoking gun we’d been seeking. A video in which Naftali came right out and said that, “God put him in the army precisely to share Jesus with Jews, to be ‘a light among Jews.’”
The video also had Naftali saying, “It is not easy to be the light in the dark,” which Aussie Dave credibly suggests is the missionary’s way of implying that “the dark” is Jewish belief.
You cannot see the video anymore, since Naftali took steps to remove the video from circulation after the blog came out. (Apparently. Because when I went to see it at Israellycool, it was marked “unavailable.”)
But it was out there long enough to document. And I thank Aussie Dave for exposing the little creep. We did not survive the Holocaust and create the State of Israel in order to let some sneaky dweeb kill our connection to our Jewishness; our connection to God and His Holy Torah.
On the other hand, people are STILL NOW sending me Naftali’s videos. Each time, I explain it to them: He’s a MISSIONARY.
Some believe me, some don’t.
And now I discover that Bibi has hired this missionary to handle his social media. Think of it! The prime minister of the Jewish State becomes the vessel through which a Christian missionary, Hananya Naftali, gets easy access to millions of Jewish Israelis with his message about Jesus (Y”Sh). Appointing Naftali to a position of influence, moreover, tends to whitewash his missionary activities, gives him an imprimatur: makes him seem clean. I can just hear people saying, “He can’t be a missionary if the prime minister of Israel hired him!”

As I was writing this piece, in fact, my attention was drawn to this article in the Jerusalem Post, which suggests that Naftali’s missionary work is a figment of the imagination, and that the “accusations” are merely a part of his “colorful past.”

So I did what I could. I wrote to Bibi and explained the situation to him. I tweeted to him. But the thought occurs that considering Naftali being Bibi’s deputy new media advisor and all, it may be Naftali who intercepts and reads my tweets and emails.

I have not yet had a reply from the prime minister or his deputy, the missionary Hananya Naftali. If I do, I will update this space.