A new project to capture urgently on film the testimonies of Iraqi Jews recorded in the book Iraq’s Last Jews has been launched in the US: the Iraqi Jewish Voices Project aims to counter the Eurocentrism of modern Jewish history. Report in the Times of Israel (with thanks: Lily):

NEW YORK — Although Oded Halahmy left Iraq in 1951, Iraq has never left him.
“Every aspect of my life has been influenced by my first home, the ‘Land of Milk and Honey’ I remember from my childhood. Palm and pomegranate trees dance in the wind,” said Halahmy, 79. “I can visualize the narrow alleyways, the houses built of ancient stones with beautifully sculpted doors, circular windows of exquisitely colored glass. My memories of Iraq are real and alive, and my attachment to Iraq is very strong. My Baghdad is the most beautiful place on earth, the Garden of Eden.”

Halahmy was 13 when he, his parents, his siblings as well as hundreds of other relatives left for Israel. Now, as his generation ages, first-person stories like Halahmy’s are slipping into the shadows of history.

“These are the very last years to capture firsthand accounts of Jewish life in Iraq. There will be no witnesses left and so there is an urgency to get the stories. It’s a last grasp. Mizrahi Jews account for half the world’s Jewry, yet their stories remain virtually untold,” said Tamar Morad, a writer and editor living in Israel.
That’s where The Iraqi Jewish Voices Project, IJVP, comes in. Using black and white portraits, interviews, and scanned historical documents, the multi-media project records the stories of the last Jews of Iraq and what it was like for them to immigrate to Israel, France, the United States and beyond. 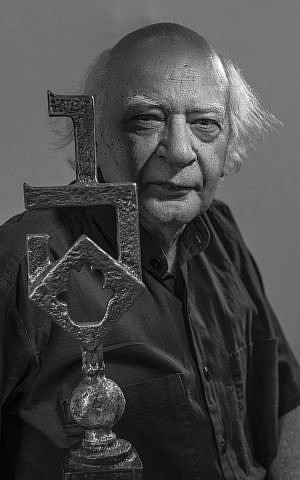 The project aims to shift the meta-narrative of world Jewry in the 20th Century, which has almost always revolved around the history of European Jewry. The bold initiative might just be the thread that stitches the Jews of the Mideast’s past to the future.

Morad, who grew up in Boston, is of Ashkenazi descent. Her husband’s family came from Iraq. In no time she realized the more she asked her father-in-law, as well as her husband’s 105-year-old grandfather, about what life was like in Iraq before they left, the more she wanted to know.

She found others wanted to share their stories as well. “You see the eagerness of people to tell their stories. It’s the first time some of them have told their stories in full,” Morad said. “It’s time the world should know it. To progress we need to be educated about the past.”

Morad co-manages the project with Henry Green, executive director of the NGO Sephardi Voices, and professor of Judaic and Religious Studies at the University of Miami.

Morad is basing the project on the book, “Iraq’s Last Jews: Stories of Daily Life, Upheaval, and Escape from Modern Babylon” — an oral history collection co-edited by Morad with Dennis and Robert Shasha — and plans to revisit and expand on some of the people and places featured in it.

The Iraqi Jewish Voices Project comes under the auspices of the nonprofit Sephardi Voices (SV), which aims to collect thousands of interviews of Jews who lived in Arab and Muslim lands. It wants to do for the Jews of Arab lands what the Shoah Foundation did for Holocaust survivors in collecting and preserving their testimony about life before, during and after World War II, Green said.