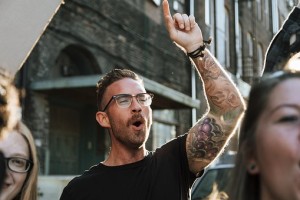 Tel Aviv, May 23 – We activists take our role seriously: forming alliances, raising awareness, generating political pressure, and partying till all hours in this fabulous city. This is where the human rights action is, where Israeli public figures can be held accountable; where journalists frequent, facilitating attention to key human rights issues; where there isn’t really any major problem, but damn, is the night life amazing. It’s a key location in the human rights realm.
Most people don’t realize the centrality of geography as a factor in the human rights arena. Often we rely on volunteers and low-level staff in the field for data and for basic monitoring activities, and yes, such personnel perform valuable functions, but not everything we must accomplish can be accomplished in remote villages in Chad or Syrian towns facing bombardment and disease. Somebody has to undertake the serious work of living and working in Tel Aviv – some choose Jerusalem, for similar reasons – because those restaurants and night clubs are not going to visit themselves. Also, it’s dangerous in sub-Saharan Africa.
Human rights workers embrace the challenges of this avenue of endeavor, formidable as they may be; difficulty inheres in all significant paths to achievement. Thus the fierce competition among UN, Red Cross, and other organizations’ personnel for postings to Israel, where everyone knows Palestinian rights require ever-increasing protection, and where it’s possible to eat at a different world-class restaurant every night and not have the same cuisine twice in six months. Plus we don’t get shot at. Also, we have buddy-buddy relationships, not to mention romances, with journalists who share our assumptions about Israeli oppression and Palestinian victimhood and lack of moral or political agency, so this dynamic gets reinforced all the time.
That’s a crucial piece of the puzzle, because if the human rights community ever admitted Israel didn’t need the disproportionate attention we give the place, we’d lose our pretext to keep coming back here. And that would be a human rights tragedy. I’ve done work in Darfur, Central America, Southeast Asia, the Balkans, and even passed through some Arab states on my way, so I’ve been around, and I know which zones require the most urgent attention. Yes, people are being massacred, kidnapped, enslaved, tortured, and raped in those other places, but Jews are building homes here. Priorities.
Also, you can’t expect those of us who are openly gay to actually spend time in the Palestinian territories. That would be suicide, and then who would do the crucial work of telling the world how barbaric Israelis are?