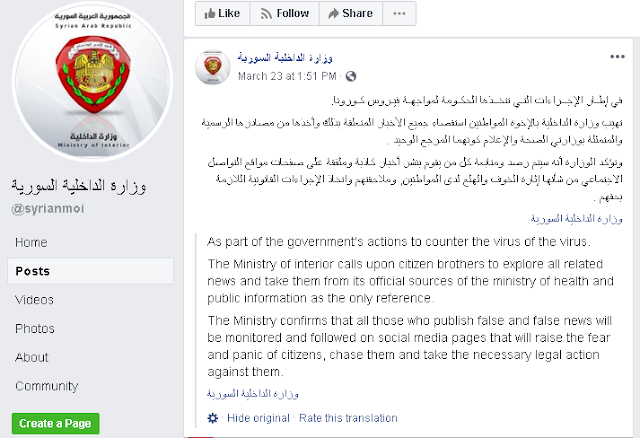 Syria’s Ministry of the Interior has threatened to arrest anyone who says anything about the coronavirus that doesn’t come directly from the government.

Up until this week, Syria denied having a single case of Covid-19 in the country. In reality, reports indicate that the epidemic is in full swing. Apparently, the government realized that its denial of any cases caused people to not take the threat seriously, so they announced a single victim – a 20 year old woman who traveled from another country – and with it a set of sweeping measures to quarantine areas of the country,

Even pro-Syrian commentators have expressed skepticism at the official Syrian position. Everyone knows that many people are still crossing between Syria and Iran where the virus is widespread and also severely underreported.

Apparently, in the northwest of the country where there are a million refugees in camps, there have already been many cases but not testing kits to confirm. The Kurdish autonomous zone has closed itself off.

Threatening to arrest anyone who admits that the epidemic is already out of control in Syria is a classic honor/shame move. To Syrian leaders, appearing strong and impervious to a virus is literally more important than the health and safety of millions of people, and Syrian insistence that it does not need outside help will kill tens of thousands – all to maintain a sense of “honor” that no one believes.