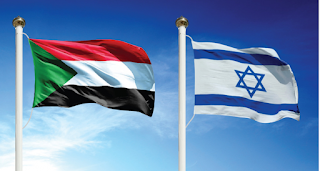 It notes that Khartoum was the warmest capital for the Jews in the Muslim world, bit that all changed in 1967 when it hosted the famous Three No’s Conference. Only four years later it nationalized the properties of the Jews, forcing hundreds of them to emigrate in search of a new home, leaving behind families whose name was associated with industry, commerce and art.
In the past year there has been a heated debate about Sudan’s relationship with Israel. The Sudanese were surprised when the head of the Sudanese Sovereignty Council, Abdel Fattah al-Burhan, met Bibi Netanyahu last February. Since then, the debate about the interests that Khartoum could gain from peace with Israel has been a hot topic, despite Sudan’s pro-Palestinian position.
Journalist Al-Nur Hamad views the issue of relations with Israel as a breaking of the psychological barrier that has been preventing Sudan from dealing in a realistic way with Israel, as it has seen in Egypt, Jordan, the UAE and Bahrain. Establishing relationships is, for Hamad, “a major starting blow in the direction of restoring the lost Sudanese identity.”
Hamad admits that “Israel has its transgressions, but some other countries have their transgressions, which if Sudan took it as a reason for hostility, then we would find ourselves with a long list of enemies.”
While the Palestinian issue has been the focus of Sudanese attention for decades, the vast majority of the new generation of youth seemed indifferent to having a relationship with Israel, and some of them, such as Mahmoud, who is a second-year university student, did not even know the details of the Palestinian issue.
Mahmoud says that “the most important thing for me is for his country to establish foreign relations that achieve the interests that my generation of youth expects.”
One of the remaining Jews in Sudan, Abu Bakr Mustafa Israel, was born in the 1990s. He expects peace to open new hopes for his generation of Sudanese Jews, and to restore to them the golden era that his ancestors had in different Sudanese cities, before things turned upside down.
Israel recounts part of his bitterness. He tells Sky News Arabia: “Despite the unique state of tolerance that characterizes the Sudanese society, political changes cast a negative shadow over the overall lives of the remaining Jews in Sudan. My father had to change his name in order to be able to join the Military Academy, and then became a senior officer in the Sudanese army before he retired and died later.
Israel hopes that peace will create a new reality for the future of its children, so that they do not have to change their names in order to enter a job, as their grandfather did before.