A Lebanese journalist asks Nasrallah a simple question and reveals to the world the truth about Hezbollah and Israel!
Must Watch video!

This isn’t the only Lebanese person I’ve seen who hates Hezbollah. The comments on Naharnet often are filled with people arguing about Israel with plenty of people defending it.

But Ben Norton, a pseudo-journalist who works for Max Blumenthal’s Grayzone site, is incensed at the Haddad tweet: 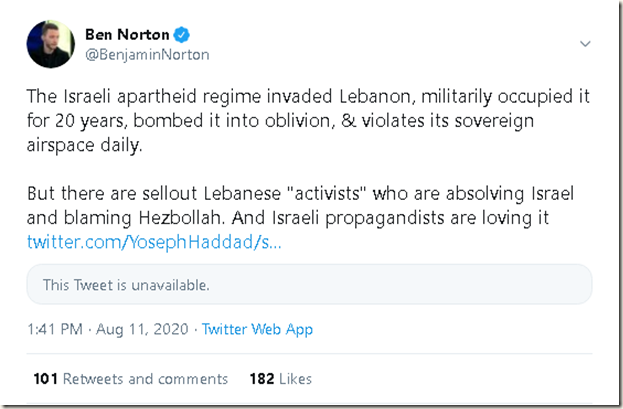 A white Westerner who considers himself a liberal is saying that Lebanese people who disagree with his rabid hate of Israel are “sellouts” for hating Hezbollah more.  This is a typical racist condescending attitude that the only Arabs who are allowed to have an opinion are those whose opinions match the Leftist white man.

The Grayzone’s apologetics for the Hezbollah terror group are something to behold. Here’s a video where they blame everyone but Hezbollah for Lebanon’s problems, and where the person being interviewed says flatly that Israel doesn’t want a functioning, civil Lebanon but prefers that it be divided into sectarian groups that hate each other, because that is what Zionism demands.  (starting at 20:00)

In the end, these people’s hate for Israel is so off-the-wall crazy that they feel that they must support any group that opposes the Jewish state, no matter how illiberal or murderous they might be.

This is the power of antisemitism – anyone who hates Jews is an ally.