It can be difficult to explain Israel’s right to exist to the online haters and debaters. After all, not all of us are Eugene Kontorovich. And since we’re not, how can anyone expect us to have all the complicated legalese at the ready to plead the legal twists and turns of Israel’s case? It’s better, instead, to keep things as simple as possible: We were here first. It’s ours.
But that’s not always as easy as it sounds. Take Quora, where I’ve been answering questions about Israel since 2011. I try to keep my answers uncomplicated so they will be easy to remember in future debates.
Quora, however, has a policy called “Be Nice, Be Respectful.” Violate this policy and Quora will collapse your answer. At this point, the moderators generally give you the option of editing your answer and allow an appeal. For me, that’s good enough, since I can usually find a workaround and rephrase.
An edit may mean changing “Palestine doesn’t exist” to “At this point in time, there is no state called “Palestine.” Which is a lot more complicated, but satisfies everyone, all around. You get to the point where you can spot what language is likely to trigger a report, so you can avoid such language right out of the starting gate. And if there’s a hiccup and an answer is collapsed, I edit and resubmit, and there’s no further problem.
Note that the Israel-hating Quorans stand ready to pounce on any perceived policy violation by the Israel-loving Quorans. It’s a war out there on Quora. The hope is that by reporting us, the Israel haters will get us permanently banned from the site. Once that happens, our truthful answers about Israel will disappear.
I was a top writer in 2018, and the best Quora answers come up in Google queries. I therefore see it as kind of mission to keep my content diplomatic enough to suit Quora moderators so my responses will stay up there on the ‘net, offering a truthful account of what Ruth Wisse calls “The Arab War Against the Jews.”
This can be a delicate balancing act. Not everyone is capable of coloring inside the lines. That goes for either side of the fence.
Rima Najjar, for instance, was permanently banned on Quora for her (apparently) anti-Israel/antisemitic content. I never read her stuff so I’m only guessing. I’m not sure what, exactly, was objectionable. But according to her Jewish friend Benay Blend, Quora is biased in favor of pro-Israel voices like my own and in banning her, is discriminating against Najjar.
This supposed bias is the reason Najjar filed suit against Quora and it’s nonsense, as I explained a little over a year ago in this space (see: Blend and Najjar Implicate Me and the Israel Forever Foundation for Getting Banned on Quora). If Najjar was banned, it wasn’t because of a pro-Israel bias, but because she couldn’t figure out how to speak Quora-ese. She likely found it hard not to sound hateful when discussing the Jewish State. Thus, Najjar violated Quora’s Be Nice, Be Respectful, one too many times and was banned for life.
It would have been difficult for Najjar to prove bias, since Quora is an equal-opportunity hand-slapper, collapsing answers and banning users on either side of the Israel/Anti-Israel divide. Najjar must have realized this fact. Because the academic subsequently dropped her suit in March (h/t Elder of Ziyon).
As I said, there’s always a work-around on Quora and Najjar could have still been on Quora today, happily typing out her hate for Israel, as long as she couched things in neutral, inoffensive terms. But hiding the truth of what one really thinks is an art and it’s definitely not always easy. The other day, for example, I answered a question:
“Can you explain the Israel-Palestinw [sic] conflict to me like I’m 10 years old?”
“This will be fun,” I thought, rubbing my hands together with glee, before formulating an answer, which was this:

A long time ago, God gave the land of Israel to the Jews. It is a beautiful and special land, so everyone was jealous and they are still jealous now. Other people keep trying to take bits and pieces of the land, and when the Jews won’t let them, they attack the Jews in all sorts of cruel ways, for instance sending exploding balloons over the border so Jewish children will play with them and get hurt. Or they’ll explode a pizza shop at a time when it is likely to be full of Jewish kids on summer vacation, having fun.
Instead of seeing how wrong it is to steal Jewish land and hurt Jewish children, the world sides with the thieves, the people that keep trying to take Jewish land, the people hurting Jewish children. Why? Because the world is mad that the Jews don’t want to switch religions. They figure it makes their newer religions look phony and false and that hurts their feelings.
Also, Jews tend to be smart and successful, and even though there aren’t a lot of them, they tend to rise to the top no matter what they decide to do with their lives. This makes other people jealous of the Jews. Which is stupid. They should instead study the Jews and try to copy them. 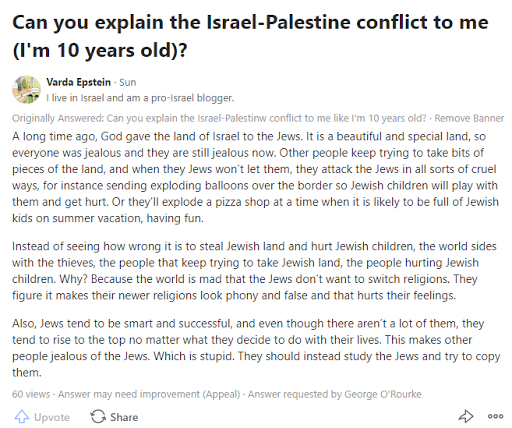 Not long after I posted this response, I of course received a message that the moderators had collapsed my answer for violating the Be Nice, Be Respectful policy. I was invited to edit and appeal. 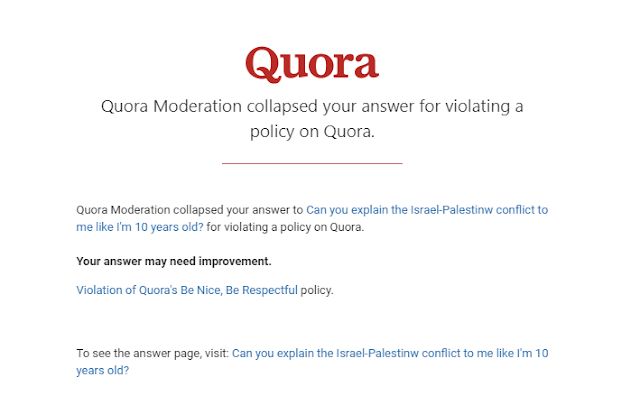 But for some reason, this time, I balked. I knew exactly what language needed changing to suit the moderators, but I just didn’t care. I had written the truth: this is what I would have said to a ten-year-old to explain things, to MY ten-year-old. To any ten-year-old.
I saw no reason to change my answer if that’s not the way I’d say it to a ten-year-old. Ten-year-olds don’t understand political correctness. It makes no sense to add a lot of language to obscure the truth and give it a neutral makeover. Such language would lengthen my answer and overly complicate things so that a child would come away more confused than before.
Which is why, after thinking it over for a couple of days, I opted to submit an appeal withoutediting my answer, as follows:

Dear Moderator, the question asks how I would explain things to a ten-year-old, not how I would couch things in a politically correct manner to satisfy the Quora moderators. This actually is what I would say to a ten-year-old. Using more neutral terms would render the explanation unintelligible or confusing to a young child. I say that as a parenting expert and a mother of 12.
Kids understand only the simplest language. As such, I would venture to suggest this was a trick question intended to trip up a pro-Israel Quoran, triggering by design, perceived violations of the Be Nice, Be Respectful policy. I believe this is the reason the question was edited after the fact: after I answered the question. This gives the question an entirely new meaning, so that my answer may seem mean-spirited in some lights, instead of merely honest.
Just as there are frivolous lawsuits, this was a frivolous report, to get me in trouble: collapsed or banned. I hope you will reconsider your decision in the interest of freedom of speech on Quora.
Thank you for your consideration. 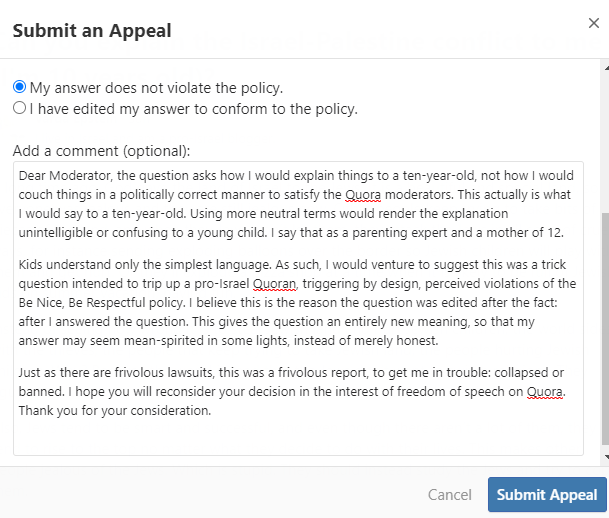 Note that somewhere between when I answered the question and my response was collapsed, the original poster changed the question. It now says: “Can you explain the Israel-Palestine conflict to me (I’m 10 years old)?” The edit is meant to exaggerate the supposedly harmful effect of my response. We’re no longer discussing a thought experiment. Instead, my answer stands retroactively, as an actual response to a ten-year-old child.
Which is why I didn’t expect for a moment that I would win my appeal. I figured the moderator would determine that my answer is “hate speech” and collapse it for good. This has happened on occasion.
“So be it,” I thought.
What some Quora moderators call “hate speech” I call “the truth.”
And sometimes I’m just not willing to lie.

I had a surprise, however, when I looked at my inbox this morning. There was a new notification: Quora had uncollapsed my answer.

Rima Najjar would say the moderator’s decision reflects the same pro-Israel bias that led to her permanent ban from the social media network–that in responding favorably to my appeal, the moderator sided with Israel. But I think the decision is a sign that sometimes reason prevails, at least on Quora. On Quora, it turns out that speaking to a moderator like an adult, allows me to explain Israel to a ten-year-old.

This is a refreshing contrast to the prevailing ethos at social media giant Facebook, where “Death to Israel” fails to violate community standards. It’s a whole ‘nother ballgame from Twitter, where despots are deemed to be just rattling sabers when they call for the annihilation of Israel and the Jews.

Quora is different. At Quora I sometimes lose. But sometimes I win. In this round, I got to explain Israel to ten-year-olds. Which seems a good enough reason to stay in the game.
For now.