Solomon was wise. For he knew that a real mother values her child’s life above all and would do anything to spare it harm. So it is with Israel, and those who claim her.

Both Jews and Arabs claim that the deed to Israel belongs to them alone. But were the Jews and the Arabs to stand in court before King Solomon, the facts of Arab eco-terror would certainly reveal the the Jews as the true deed-holder to the land.

As of this writing, according to the IDF blog, “Hamas has burned more than 7,400 acres of land and set more than 750 fires, an average of more than 11 fires a day, using arson kites and incendiary balloons.” 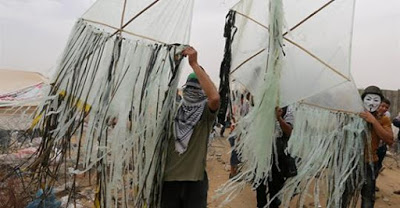 The Jews, on the other hand, have planted over 240 million trees. In fact, according to the Jewish National Fund (JNF), Israel is one of just two countries that have entered the 21st century with a net gain in number of trees. The very creation by the Jews of an organization whose main mandate is reforestation, reveals the desire to grow, nurture, and develop the land.

The real owner of the land, loves the land. And you do not burn or destroy what you love. You make it grow. You cultivate every inch.

This is exactly what the Jews have done since their return to the land and Jewish statehood enhanced these efforts. Israel had been left denuded and destroyed by the Muslim Conquest and subsequent uncaring foreign occupations. The Ottomans, for example, did nothing to restore the territory to the former glory of, for instance, Temple times. All of the occupiers, ancient and contemporary, came and conquered, plundered and destroyed, then moved on to greener pastures. They left an arid dust bowl and ruins.

Roman Statesman Dio Cassius wrote of the Roman destruction of Israel:
“Of their forts the fifty strongest were razed to the ground. Nine hundred and eighty-five of their best-known villages were destroyed….

Thus the whole of Judea became desert, as indeed had been foretold to the Jews before the war. For the tomb of Solomon, whom these folk celebrate in their sacred rites, fell of its own accord into fragments, and wolves and hyenas, many in number, roamed howling through their cities.”

“In the twelve and a half centuries between the Arab conquest in the seventh century and the beginnings of the Jewish return in the 1880’s, Palestine was laid waste. Its ancient canal and irrigation systems were destroyed and the wondrous fertility of which the Bible spoke vanished into desert and desolation… Under the Ottoman empire of the Turks, the policy of disfoliation continued; the hillsides were denuded of trees and the valleys robbed of their topsoil.”

Of the once fertile Galilee, Mark Twain wrote:

“These unpeopled deserts, these rusty mounds of barrenness, that never, never do shake the glare from their harsh outlines, and fade and faint into vague perspective; that melancholy ruin of Capernaum: this stupid village of Tiberias, slumbering under its six funereal palms…. We reached Tabor safely …. We never saw a human being on the whole route.”

Of the Holy Land in general, Twain remarked:

“Nazareth is forlorn …. Jericho the accursed lies a moldering ruin today, even as Joshua’s miracle left it more than three thousand years ago: Bethlehem and Bethany, in their poverty and their humiliation, have nothing about them now to remind one that they once knew the high honor of the Savior’s presence; the hallowed spot where the shepherds watched their flocks by night, and where the angels sang, “Peace on earth, good will to men,” is untenanted by any living creature… Bethsaida and Chorzin have vanished from the earth, and the “desert places” round about them, where thousands of men once listened to the Savior’s voice and ate the miraculous bread, sleep in the hush of a solitude that is inhabited only by birds of prey and skulking foxes.

“Palestine sits in sackcloth and ashes…. desolate and unlovely… it is dreamland.”

But with the Jews’ return, homes were built and farms were planted. The Jews took a land left barren and made it flourish, coaxed life out of every corner. Saw its potential, like a mother sees worlds in her newborn infant, a blank slate that might yet save the human race.

One might suggest that the idea for a two-state solution mirrors King Solomon’s solution. Offer to cut the land in two, and give half to each party. The real mother will refuse, offering instead, aid or autonomy. The real owner knows that ceding land that keeps her citizens safe, secure, and prosperous to a murderous enemy is to destroy the whole.

Giving the enemy half the land in the form of statehood, is just a trick to dupe the real mother out of her baby. Which is what the enemy wants. They certainly don’t care about the land, or they would not be setting it aflame. They want death and destruction. The land is beside the point. They don’t care how you cut up the baby/Israel. They don’t care if Israel dies a cruel death. As long as the real mother doesn’t get her back alive.

The Jews’ enemy is Israel’s enemy. It is an Angel of Death claiming sole ownership to the land, even as it destroys all that lies within: the vegetation, the animals, the people.

A falcon attached to a rope with flammable material was found today near the Gaza Strip. Arson fires have been caused by incendiary materials flown from Gaza into Israel. Apparently it’s not enough to destroy nature with kites, now falcons are being used for terror as well. pic.twitter.com/j6noxwCwqS

And it has always been this way. This lust for destruction lies in contradistinction to how an owner feels about his property. It shows scorn rather than respect for the life the Jews have eked out of the land, hardscrabble. The only thing they have proven with Arab eco-terror is that Israel is a land that can flow with milk and honey and life, or be burnt to a crisp.

In the Arab people of the PA and Gaza, you have not a potential caring steward of the land, but as in the story of Solomon’s wisdom, a jealous harlot who sells a pack of cheap lies masquerading as the real deal. One who applauds the mortal wounding and murder of a baby, just so long as the other woman doesn’t get to have it alive. This Arab harlot is motivated by hate and jealousy so large that it crowds out the maternal instinct that makes other human beings nurture and protect the things they hold dearest.

In burning the land, in destroying its ecosystem and killing innocent children and animals, the Arab people of the PA and Gaza have once again betrayed the false nature of their claims to the land. They have proven that it is the Jews who are the real owners of Israel. Because it is the Jews who continue to strive to preserve and protect and defend, even as the Arab people of the PA and Gaza continue to rape, destroy, and pillage the land, without end. The terrorists even use the aid they receive from Israel, the EU, and the United States to stoke the fires of their terror machine, instead of using the money to build schools and hospitals for the good of their own people. Hamas even pays a stipend to anyone who will lend a hand in the destruction of Israel.

So the next time you hear the excuse that kites and condoms are the Arab people’s only weapons against the mighty Jews who stole their land, don’t you believe them for a minute. The real owner would never lay a hand on the land, would never burn the land and the animals, or harm the people.

And it doesn’t take the wisdom of a Solomon to know the difference.