Last week I reported on a Europal event due to take place on the SOAS campus. Europal have links to Hamas and have spread antisemitic material on a UK campus. Several Jewish organisations set up campaigns and angry members of the community sent emails to the university in protest. Eventually SOAS responded -and sent out a reassuring email from the SOAS Director. The event would go ahead but was a ‘student only’ event. There would be no Europal presence. SOAS promised they would be ‘no external speakers. The event took place and now we know the truth. SOAS has been caught lying to us.

This is the email SOAS sent out: 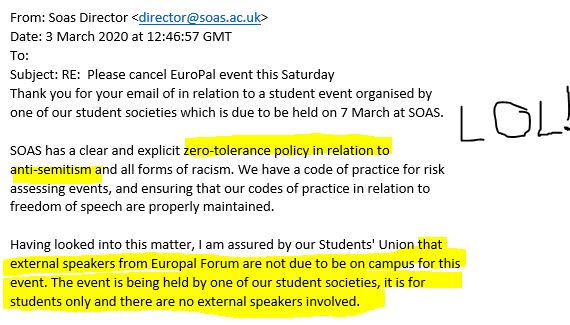 The email is clear. This is a student only event – there will be no external speakers – and Europal are not going to be there either.

The event took place on Saturday. This is an image from one of the sessions.

Speaking at the front is Shamiul Joarder. Jorder is Head of Public Affairs of Friends of Al Aqsa (FoA) – another Islamist group. For many years FoA supported the Iranian, pro-Hezbollah ‘Al Quds’ day march in London. The FoA founder Ismail Patel has spoken at the event. Patel has also recommended the writing of Roger Garaudy -a 9/11 truther and convicted Holocaust denier. Friends of Al-Aqsa has also published work by Holocaust denier Paul Eisen and antisemite Gilad Atzmon. In the following image Patel can be seen with Hamas leader Ismael Haniyeh:

Patel has openly said that Hamas ‘is not a terrorist organisation’ and fully supported the speaking tour’ of Raed Salah, who has since been found guilty of inciting terrorism. Patel himself has advocated the killing of adulterers.

The SOAS antisemitism training that wasn’t

In the above image of the event -at the back on the left -are two gentlemen who do not seem to be students either. The one closest to us is Jonathan Rosenhead from Jewish Voice for Labour. A Yevsektsiya type movement of people who have no regard for the Jewish community at all – but rather are set up to attack and divide it -whilst giving protection and fodder to antisemites. Rosenhead was at the event to talk about ‘antisemitism’. He did so alongside another well-known JVL founder -Naomi Wimborne-Idrissi: 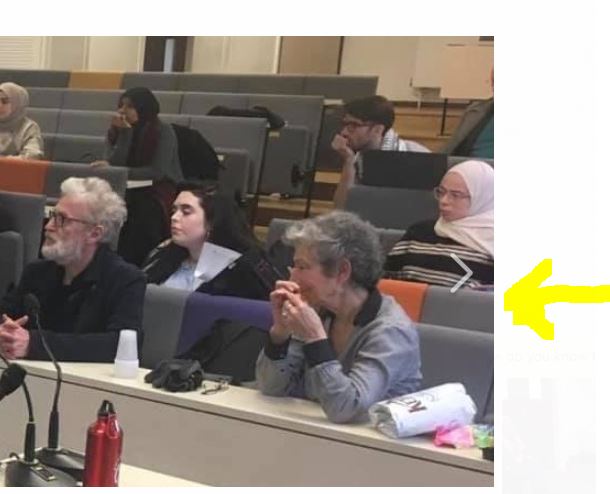 This provides us with two more of the external speakers that SOAS promised would not be there. Worst still – they were there to do what they always do – legitimise Jew-hatred. Both Rosenhead and Idrissi are long time members of the toxic Facebook group Palestine Live. Idrissi has also spoken at the pro-Hezbollah Al-Quds event: 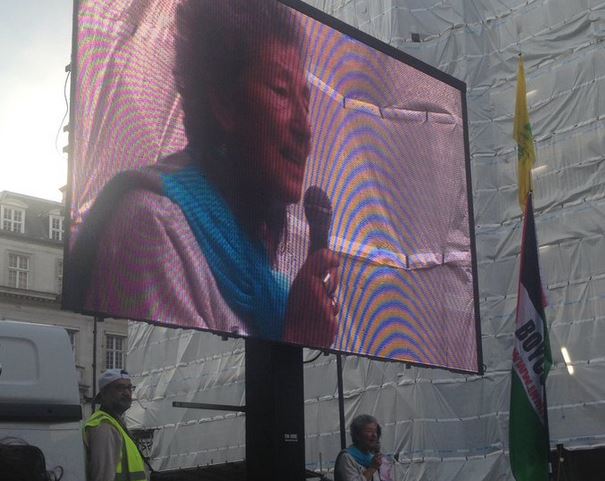 Any organisation -on campus or otherwise -that engages with these fringe figures knows exactly what they are doing. It isn’t an accident that Islamist groups turn to groups like JVL or ‘Jewish Network for Palestine‘ – they legitimise antisemites. How can they ever be allowed onto campus?

There was also a Europal official at the event. Something else that SOAS said would not happen. The image is of Robert Andrews 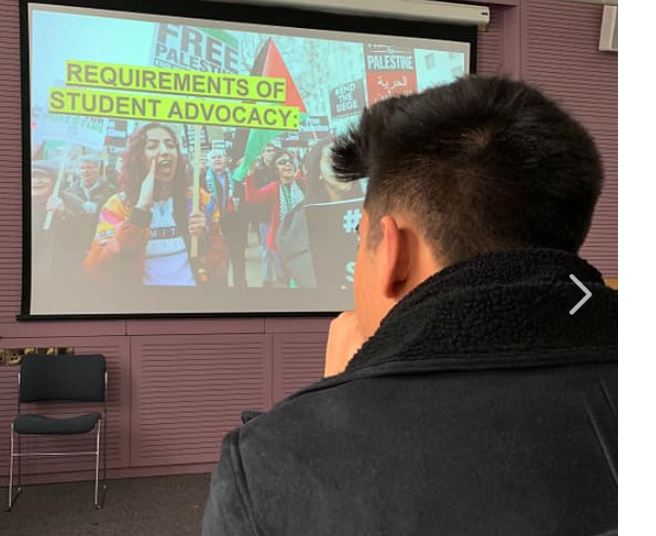 Andrews is a ‘researcher’ at Europal. The email SOAS sent out to reassure the Jewish people who were concerned at the extremists on campus – was an absolute and total lie.

Losing control at SOAS and lying to the Jews

Between Friday and Sunday SOAS held three separate toxic events on campus. One of them from a group set up to attack the Jewish community and legitimise the hate against them. Students also advertised another event to be held on their campus – featuring Chef Rubio. Rubio has a ‘history‘ of using antisemitic language.

But what is important here is not just the rampant antisemitism on the SOAS campus – it is also the email response that the Jewish people who complained received. Either the SOAS hierarchy is no longer in control of what is taking place on their campus -or this is just more evidence that this London university is too far gone to care. Are SOAS in control – or has control been handed to Hezbollah supporting radical Islamist groups? This is a university in London, not Tehran. When those students leave, they walk onto our streets.

Either way – this is an issue that government really needs to start dealing with. SOAS is incubating antisemites and extremists – handing them degrees and sending them out to unleash their hatred onto all of us. It is time this was stopped.

This research is unique – it depends on community support to continue – and the results speak for themselves. For five years I have been creating headlines. I engage in deep research, much of it undercover, into anti-Jewish hatred, anti-Zionism and anti-western extremism. My work is fully independent and this independence is important for the freedom to go where I need to go. The Algemeiner recently named me as one of the J100 (‘top 100 people positively influencing Jewish life’).  If you can, please consider making a donation towards the research.

The post SOAS Director – caught lying to the Jews to keep them quiet appeared first on The David Collier blog.