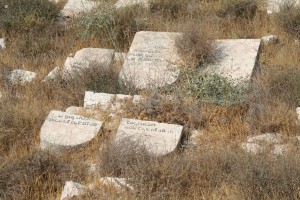 Jerusalem, March 1 – Vandalism at this holy city’s oldest active Jewish cemetery has impeded the customary dancing activities of Haaretz writers and editors, the paper’s publisher lamented today.
Amos Schocken held a meeting today with senior editorial staff and columnists to discuss the ongoing difficulty in dancing on the graves of people buried on the Mount of Olives facing the Temple Mount, and to devise ways of maintaining the practice without compromising the efforts of local enthusiasts to continue smashing Jewish tombstones.
Schocken delineated the challenges involved in dancing on those Jewish graves, including potential liability for injuries Haaretz contributors might incur while engaged in that important journalistic activity. “Our mission, as I have defined it, aims to place only certain people or institutions in harm’s way,” he noted. “We remain very strict about confining harm to people who are religious Jews, the political right, IDF soldiers, police, and any positive sense of Jewishness. But we draw the line at letting our people come to harm. It would just be irresponsible.”
“We must find a way to adhere to our mission of inviting, justifying, and celebrating harm to Jews,” continued Schocken. “But prudence demands that we exercise good judgment when it comes to placing our writers in harm’s way. For the time being, dancing on the graves of Jews buried on the Mount of Olives will be restricted to those few areas of the cemetery that have not been vandalized in such a way that would pose a hazard to our dancers.”
Several editors and writers objected to the decision. “I get what you’re saying, Amos, but with all due respect, which I of course would deny to anyone who thinks differently from me, I’m willing to assume that risk,” insisted Gideon Levy. “What right did those Jews have to be buried there before the place fell into Jordanian hands in 1948? I’m willing to absolve Haaretz of any liability for my dancing on those graves, whether their tombstones are intact or smashed.”
Schocken, for his part, praised Levy’s willingness to risk injury in support of his beliefs, but put his foot down. “It’s inspiring to see you actually volunteer to put yourself in danger of a sprained ankle, Gideon – and I’m not being sarcastic here,” he answered. “I know it’s not your custom to put yourself at risk while calling for Jewish settlers or the religious to suffer. But when we dance on those graves, we might also get in the way of the Palestinian patriots who are smashing the monuments. That’s a possibility I’m sure you agree must be prevented.”