An official ceremony was held to inaugurate a cultural centre in a former synagogue in the Jerusalem district of Silwan, Haaretz reports. Silwan is ‘overwhelmingly Palestinian’ today only because its original Yemenite Jewish residents were driven out by Arab riots in the 1930s.

Two cabinet ministers, two candidates for Jerusalem mayor, the Sephardi chief rabbi of the city and a right-wing US former governor on Wednesday celebrated at a cornerstone ceremony for a heritage center in a former Yemenite synagogue, in overwhelmingly Palestinian Silwan, near the Temple Mount.

Also on hand was a representative of the Moskowitz family, which supports Jewish settlement in Palestinian neighborhoods of the capital.

The building — once the synagogue of Kfar Hashiloah, a village built for poor Yemenite immigrants in the early 1880s and evacuated during Arab riots in the early 20th century — was acquired in 2015 by the right-wing Ateret Cohanim organization, which settles Jews in East Jerusalem.

That was after a long legal battle that culminated in 2015 with a court ordering the Palestinian Abu Nab family living there to leave.

One member of the family still has an apartment in the complex, but the access to it is in the hands of Ateret Cohanim — an issue that is still being contested in the courts. 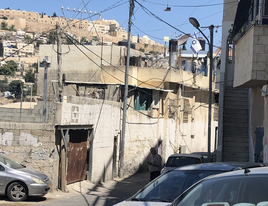 The Israeli flag flies atop a building which was once a Yemenite synagogue in the mainly Palestinian neighborhood of Silwan, East Jerusalem. The government is helping to fund the right-wing owners of the building, Ateret Cohanim, to turn into a Yemenite immigration heritage center. (Sue Surkes)

The Culture Ministry is to provide NIS 3 million ($816,000) and the Jerusalem Affairs Ministry NIS 1.5 million ($408,000) toward a $3 million project to establish the heritage center in the former synagogue for the preservation of Yemenite immigrant culture.

A Miami Beach synagogue has pledged to raise half a million dollars, while the US-based Rohr family has helped to fund a religious study center there.
Paying tribute to fellow Likud lawmaker Nurit Koren, who pushed for the project to be funded, and to Ateret Cohanim founder and chairman Matti Dan, whom she called “the greatest of all,” Culture Minister Miri Regev said, “Look around. We are surrounded by Jewish heritage. The archaeologists won’t find a single Palestinian coin here! We have come home.”

Eighty years after the British mandatory police evacuated the Jews to protect them from Arab rioters, the Jewish community returned to the synagogue, bringing with it “a Torah scroll, Torah learning, liturgical songs and the cultural richness of the great, modest, Israel-loving Yemenite people,” she said.

Ze’ev Elkin, the environmental protection minister, who also holds the Jerusalem Affairs portfolio and has announced that he is running for Jerusalem mayor, said, “Just as we are proud to be connected with everything happening in the City of David [another part of Silwan, where Jews associated with the right-wing El Ad organization are creating tourism projects and settling Jews], we are proud to be connecting with the history of the Yemenite immigration here.”

More about the Yemenite village of Silwan