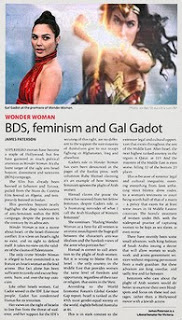 James Paterson, who’s not yet 30, has been since last year a Liberal member of the Australian Senate, representing Victoria.   In his maiden speech he called on Australia to relocate its embassy from Tel Aviv to Jerusalem.

And in the latest issue of the Australian Jewish News Senator Paterson has a splendid article regarding the brouhaha over the casting of an Israeli actress in the movie Wonder Woman.

It’s replicated on his web page.


‘Superhero movies have become a staple of Hollywood, but few have garnered as much political attention as Wonder Woman. It’s the latest target of the ugly anti-Israel Boycott Divestment and Sanctions (BDS) campaign.

The film has already been banned in Lebanon and Tunisia, pulled from the Nuits du Cinéma film festival in Algeria, and temporarily banned in Jordan.

This pointless boycott neatly highlights the deep undercurrent of anti-Semitism within the BDS campaign, despite the protests to the contrary by its advocates.

Wonder Woman is not a movie about Israel, or the Israel-Palestine conflict. It’s silent on Israel’s right to exist, and its right to defend itself. It takes no view on the validity of the claims of Palestinians.

The only crime Wonder Woman is alleged to have committed is to feature an Israeli woman as the lead actress. This fact alone has been sufficient to justify and excuse boycotts, bans, and over the top criticism.

Like other Israeli women, Gal Gadot served in the Israeli Defence Force. Like most people, Gadot has condemned Hamas for its terrorism.

Her views on the right of Israelis to live free from the threat of violence, and her support for the IDF’s securing of this right, are no different to the support that the vast majority of Australians give to our troops fighting in Afghanistan, Iraq, and elsewhere.

Gadot’s role in Wonder Woman has even been denounced in the pages of the Fairfax press, with columnist Ruby Hamad claiming it’s an example of the how Western feminism ignores the plight of Arab women.

Hamad claims that the praise the movie has received from her fellow feminists’, despite Gadot’s role, is “a frustrating reminder of what I call the Arab blindspot of Western feminism.”

She continues: “Hailing Wonder Woman as a hero for all women is an ironic assault given the huge gulf between the character’s anti-war idealism and the hawkish views of the actor who portrays her.”

Hamad is correct to call attention to the plight of Arab women. But it is wrong to blame this on Israel – the only country in the Middle East that provides women the same level of freedom and opportunity, regardless of their race or religion, that exists in the west.

According to the World Economic Forum’s Global Gender Gap report Israel is ranked as the 49th most gender-equal society in the world, slightly behind Australia at 46.

This is in stark contrast to the extensive legal and cultural oppression that exists throughout the rest of the middle east. After Israel, the next highest ranked country in the region is Qatar, at 119. And the majority of the middle east is even worse, filling 12 of the bottom 20 places.

This is because of systemic legal and cultural inequality, covering everything from laws enforcing strict Islamic dress codes, to woman’s testimony in court being worth half of that of a man’s – a policy that exists for at least some issues in 14 Middle Eastern countries. The horrific treatment of women under ISIS, with their widespread practice of capturing women to be kept as sex-slaves, is even worse.

There have recently been some small advances, with King Salman of Saudi Arabia issuing a decree that will allow women to study, work, and access government services without requiring permission from a male guardian. But these advances are long overdue, and sadly, few and far between.

Feminists who care about the plight of Arab women would do better to examine their own blindspots and focus on these real outrages, rather than a Hollywood movie with a Jewish actress’

On Facebook Senator Paterson doe not resile from proclaiming his staunch support for Israel: 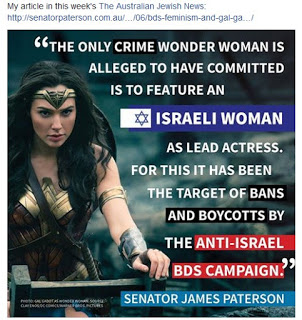 Needless to say, the usual suspects are not happy: 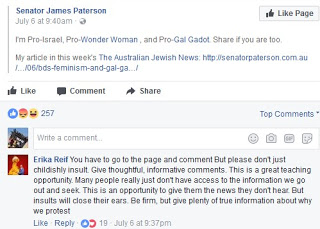 And many, including thee two

and the sample below, have revealed the grubby antisemitism that motivates their hatred of Israel: 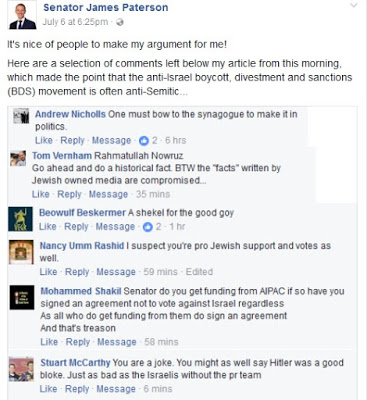 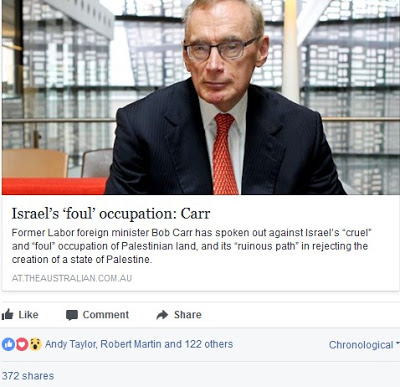 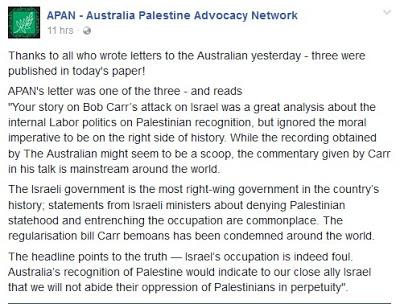