And here’s (hat tip: Christians United for Israel UK) Ms Thornberry in July, clashing with Conservative MPs regarding the the Middle East, Corbyn’s “friends” and the recognition of a Palestinian state.

https://www.youtube.com/watch?v=Msh2SqpQvh8
Is it any wonder, then, that  Marvellous Melanie sees Thornberry’s stance as emblematic of the malevolence Corbyn’s Labour Party is evincing towards Israel and by extension towards the Jewish People?
To quote from Ms Phillips’s denunciation:

‘When Labour party leader Jeremy Corbyn refused to attend this week’s dinner in London to mark the centenary of the Balfour Declaration, a dinner to which Israel’s Prime Minister Benjamin Netanyahu has been invited as the guest of Britain’s Prime Minister Theresa May, Corbyn said Labour’s shadow foreign secretary Emily Thornberry would attend in his place.

Now remarks made by Thornberry inescapably imply that, like Corbyn, she too regrets the fact that Israel was ever created. Instead she supports its mortal enemies whose agenda remains Israel’s destruction….

Her support for the existence of Israel is, by her own lights, conditional on the existence of a state of Palestine. She thus displays her profound ignorance of Jewish, Arab and Middle Eastern history by assuming that people called the Palestinians were entitled to the same promise of a national homeland. ….

And of course, a Palestine state alongside Israel has been on offer repeatedly since 1936 – yet it has been the Arabs and “Palestinians” who have refused it while the Jews have always accepted it. There could be a state of Palestine tomorrow if the Palestinians would accept Israel’s right to exist alongside it. Instead, they want such a state solely in order to destroy Israel altogether….’

Meanwhile, anti-Israel Jewish-blogger-married-to-a-Christian-vicar Robert Cohen (“Micah’s  Paradigm Shift”) and his friends on social media are celebrating a letter he wrote to the Manchester University authorities: 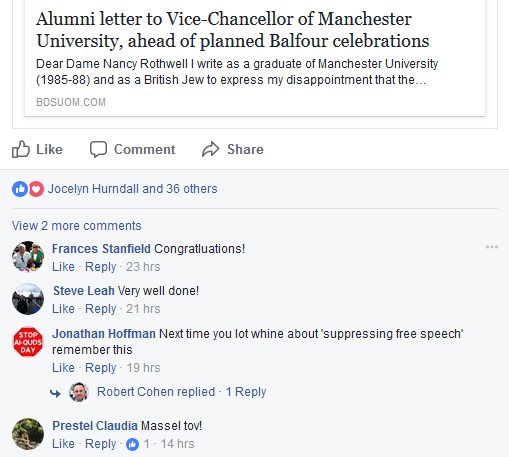 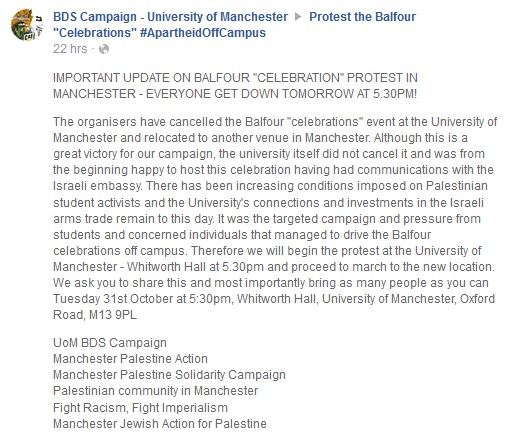