Outside the Curzon Cinema in London’s Soho on Friday night, a little squad of Israel-haters from the Islamic group Inminds protests the cinema’s hosting of an Israeli film show held under the auspices of  the Israeli Embassy.

There’s no Sandra Watfa this time to lead the demonisation of the little Jewish State; instead, there’s some chap with a suspicion of a Scottish accent.

Nor are there any flag-waving Zionist activists on hand, although things suddenly get noisy when raucous chants of “Free Palestine!” are met by booming cries of “Shame on you!” from a pro-Israel couple who proceed (with what aim in view is unclear) to summon a waiting Mr Plod.

Allegations that Israel is an apartheid state, like those comparisons to South Africa under white minority rule recently made by former Foreign Office diplomat  Craig Murray, have been ably dissected by Israeli journalist and commentatorYisrael Medad, who writes in a brand-new article that can be read in its entirety here:


‘Quite plainly, language in the discourse is being corrupted and definitions are being eviscerated. Moreover, the object of this exercise is to demonize Israel and Zionism, poison minds and attempt to disenable any defender of Israel and Jewish nationalism from responding by literally dictating the conversation to the total disadvantage of a pro-Israel stance. And tax-exempt donations to the New Israel Fund monetize this language.

In essence, we need acknowledge that nothing has really changed from the beginning of the attacks on Zionism in the mass media led by Lords Northcliffe, Rothermere and Beaverbrook in the early 1920s and the targeting of Jews as Jews, which allows anti-Semitism a free ride. As [British historian]David Cesarani put it in 1989, is anti-Zionism motivated by principled objections to Zionism and sympathy for the Palestinian Arabs, or more due to hostility to the Jews or that their antipathy to Zionism is based on prejudices regarding Jewish behavior?

Zionism’s opponents elasticize language. They stretch terms that properly belong in one sphere of activity or thought and seek to apply it, unfairly and incorrectly, to what is happening in Israel. There’s even the trick called “Holocaust inversion,” for example. When I first became involved in hasbara efforts in 1964, one of the favorite ploys was “we can’t be anti-Semitic for we are Arabs and Arabs are Semitic.”

Today, from Carter on down, “apartheid,” which indicates a complete separation based on race is now applied to Israel, as if there are two sets of toilets and water fountains. Or that T’rua handout I quoted from above reads “Green Line: Israel’s internationally recognized border” when the actual ceasefire agreement states

Article VI 9. The Armistice Demarcation Lines defined in articles V and VI of this Agreement are agreed upon by the Parties without prejudice to future territorial settlements or boundary lines or to claims of either Party relating thereto.

Or in other words, the Green Line was quite definitely not Israel’s internationally recognized border. In fact, the word “border” appears but once and as a future issue Israel could raise, an issue of “border rectification.” The exact term used in the agreement is “Armistice Demarcation Lines.” Language is artificially stretched, elasticized and the intent of the newly defined term becomes a weaponized semantic.

As for “colonialism,” what is it that Arabs did in the seventh century if not conquer a country not theirs, occupy it and then colonize it? Who “occupied Palestine,” or rather, the area the international community set aside for the establishment of an Arab Palestine state, if not Jordan, an act the international community basically ignored because Jews were not involved? Where is the actual apartheid practiced, if not within the confines of the Haram A-Sharif on the Temple Mount, where Jews cannot even drink water from the fountains there—not to mention pray or even just read from the Bible?

For all these examples and many more, there are no words to describe the deviousness in subverting historical truth and current events. Opponents of Israel and Zionism abscond with the rhetoric, and not only fashion a made-up narrative but create a new language in which to argue the Arab conflict with Israel. Their elasticizing of semantics is stretching the truth.’  [Emphasis added]

Meanwhile, in America the Sojourners organisation’s magazine staff gets a dose of anti-Israel propaganda from “apartheid state” demoniser Stephen Sizer during his recent visit stateside: 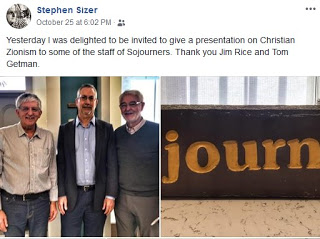