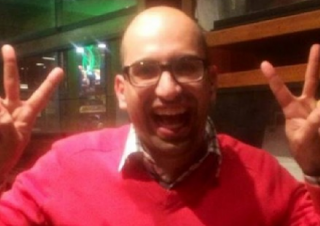 From Steven Salaita, the professor who keeps losing his teaching positions, at The New Arab, referring to a NYT column by Bari Weiss where she says that cultural appropriation is a good thing:


Weiss knows, or should know, that the controversy about Israel’s appropriation of Palestinian food – most infamously its claim to hummus, a lucrative product in Europe and North America – has nothing to do with Jews eating Arabic food. In fact, it has nothing to do with Jews at all. That ludicrous idea is possible only because Zionists aggressively conflate Jewishness with Israel.

Instead, it has everything to do with a deliberate, decades-old programme to disappear Palestinians. Referencing Arab defensiveness about traditional dishes without mentioning colonisation or ethnic cleansing is a whitewash.

Weiss provides a textbook example of liberal Zionist disdain presenting as multicultural devotion. Palestinians are well familiar with that hustle.

When Zionists (or their oblivious collaborators) claim Arabic food as Israeli, it’s not a paragon of intercultural harmony but the studious destruction of Palestinian culture. We can mitigate ambiguity by avoiding the word “appropriation,” which doesn’t adequately capture the dynamics of Israel’s voracious appetite for anything that can be marked “Indigenous,” which it needs to shore up an ever-tenuous sense of legitimacy.

We should remember that while chefs, shopkeepers, and propagandists validate the theft, the main culprit is the Israeli government, which brands falafel the “national snack” and advertises a plethora of Levantine dishes as authentically Israeli in tacky Brand Israel campaigns.

State involvement in the pilfer of Palestinian food illustrates that we shouldn’t reduce the issue to individual consumption. It’s a systematic effort to validate settler colonisation.

It’s no shock, then, that Palestinians and their neighbours get salty whenever hearing the phrase “Israeli hummus.” Using Arabic food as a symbol of Zionist identity hands over the day-to-day victuals of the native to the coloniser. It’s a project of erasure, a portent of nonexistence, a promise of genocide.
…
Such is to be expected of an ideology defined by a rapacious appetite for other people’s possessions. “Israeli” couscous, hummus, falafel, shawarma, fattoush, mjuddera, and knafeh, like the state forever aggregating glory from deception, is merely a rawboned fantasy nourished by a gluttonous diet of empty calories.

Calm down, Steven. Count to ten and breathe.

You are an idiot.

Israelis aren’t trying to erase Palestinian history – because there is no history to erase. Hummus and falafel are no more “Palestinian” than they are Israeli.

And, yes, no Israeli who matters claims that these are originally Israeli foods! Salaita builds his entire bizarre rant on the idea that Israelis are claiming that these Levantine foods are less than 70 years old, and no one says that.

Saying that falafel is Israel’s national dish does not imply that Israelis claim to have invented it (although the falafel sandwich in pita with salad actually was invented in Israel by Yemenite immigrants.) It doesn’t mean that Israelis want to steal Arab cuisine. It only means that Israelis like falafel a great deal. It really isn’t that difficult to understand.

And yes, Israeli chefs (like all good chefs) take foods from other cultures – and often change them so much as to make them their own.

In this essay, Salaita shows how poor an academic he is. Salaita thinks of Israelis as thieves first, as his last paragraph shows, and then he writes this entire crazed article so he can twist the facts into that slander.

Moreover, saying that the phrase “Israeli hummus” is a “promise to genocide” should be, in a sane world, a guarantee that no university will ever hire Salaita – on the grounds of sheer stupidity.