Old habits die hard, and the Arab penchant to call anyone you oppose a “Zionist” is one that will be around for a while.

A writer named Dr. Adel Al-Shuja, who seems relatively prominent, wrote an essay, picked up by several Arabic news sites, where he claims that Houthis in Yemen are actually Zionists, following the orders of their Iranian Zionist masters. 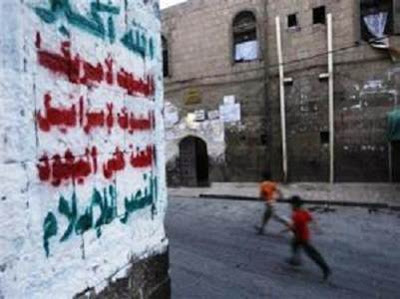 “The leaders who lead the Houthi group are aware that they are working for Zionism while the vast majority of this group does not realize this,” Al-Shuja says. That’s how the Houthi logo can say “Death to Israel, Damn the Jews” while it is really Zionist.

Yousee, Israel’s ties with Iran remained strong even after the Shah was toppled. The Ayatollah Khomeini may have hated everything about the Shah but apparently he shared his love for Israel. But he kept that part of his philosophy quiet.

But what does Israel want to take over Yemen for?

Glad you asked. You see, “Yemen is the light of civilization that sheds light on human civilizations.”  This “disturbs neighboring countries that have no civilization or history. ”  Those Jews, jealous of the rich emeni culture, want to steal it.

The second reason is because Mount Dod in Saada is really the “Mountain of David” supposedly mentioned in the Torah. So it is very important to Jews.

The Jews who used to live in Yemen before 1948 lived in the Beit Baws section of Sana’a, and now that section of town (after 69 years of being a slum) has become a hot real estate market. Those Jews again.
Of course, the fact that the Houthis are destroying beautiful Yemeni cities like Sana’a is really all the proof you need to know that they are “Zionist.”

Finally, we have this proof:

Al-Shuja warns his readers: “We are in a critical stage. Either we eliminate this Zionist seed, while it is still in its infancy, or we become what the Palestinians have become.”

At least Dr. Al Shuja admits that the Jews bought the land!
.