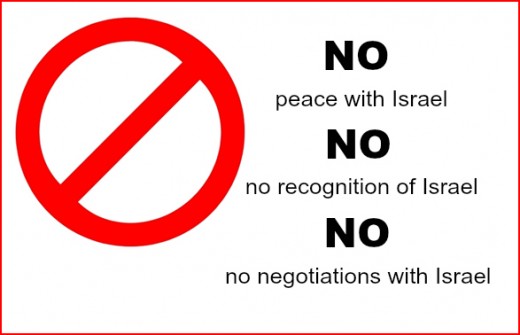 There are lots of articles being published in recent and upcoming weeks about the Six Day War and its legacy.

Any article that talks about “occupation” and “colonialism” and all the other evils that are ascribed to Israel, that do not mention the Khartoum Resolution of September 1, 1967, is an example of deceit.

The main paragraph of the Khartoum Resolution said:


The Arab Heads of State have agreed to unite their political efforts at the international and diplomatic level to eliminate the effects of the aggression and to ensure the withdrawal of the aggressive Israeli forces from the Arab lands which have been occupied since the aggression of June 5. This will be done within the framework of the main principles by which the Arab States abide, namely, no peace with Israel, no recognition of Israel, no negotiations with it, and insistence on the rights of the Palestinian people in their own country.

As Michael Oren writes in an abbreviated history of the Six Day War published on Sunday:


A month after the war, Israel formally annexed East Jerusalem, but it also offered to return almost all of land captured from Syria and Egypt in exchange for peace.

The Arabs responded with “the three noes”: no negotiations, no recognition, no peace.

I don’t think that returning the lands would have been a good idea, but the fact is that Israel did offer land for peace – a much more generous offer than the Palestinian Arabs are likely to ever receive.

And the Arab leaders said “no.”

Who can blame Israel for holding onto a small percentage of the territory it won in a defensive war, on a front where it warned its enemy to stay out of the fighting to no avail? Where the alternative is a state that is only nine-miles wide that is literally indefensible?

But Israel did make the foolhardy offer. And the Arabs responded that they would prefer war to peace – an attitude that the Palestinian Arabs have maintained and demonstrated very bloodily on multiple occasions, most notably in 2001 but also by encouraging the more recent “knife intifada.”

If someone thinks that “occupation” is the ultimate evil and doesn’t have a word to say about the Arab leaders’ decision to reject peace in exchange for virtually all the land Israel gained in 1967, then that person doesn’t care about “occupation” or peace – they support the old Arab genocidal attitude towards Jews in the Middle East.