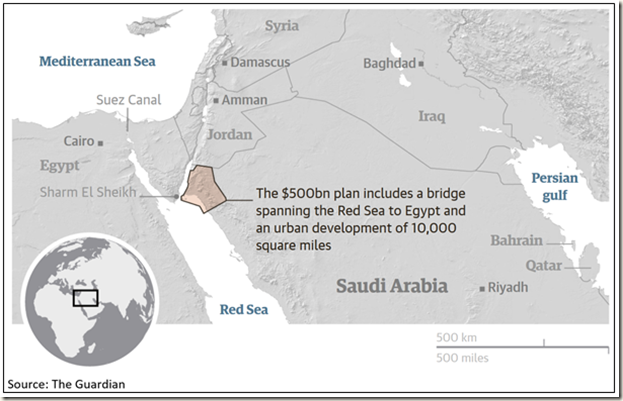 A Sudanese writer is claiming that a Saudi development initiative is actually an excuse for Israeli expansionism in the Persian Gulf.

The Saudi initiative is called “NEOM:”

NEOM is a bold and audacious dream. It is a vision of what a New Future might look like (in fact, NEOM means, “new future”). It’s an attempt to do something that’s never been done before and it comes at a time when the world needs fresh thinking and new solutions. NEOM is being built on the Red Sea in northwest Saudi Arabia as a living laboratory – a place where entrepreneurship and innovation will chart the course for this New Future. NEOM will be a destination, a home for people who dream big and want to be part of building a new model for sustainable living, working and prospering.

NEOM will include towns and cities, ports and enterprise zones, research centers, sports and entertainment venues, and tourist destinations. It will be the home and workplace for more than a million citizens from around the world. 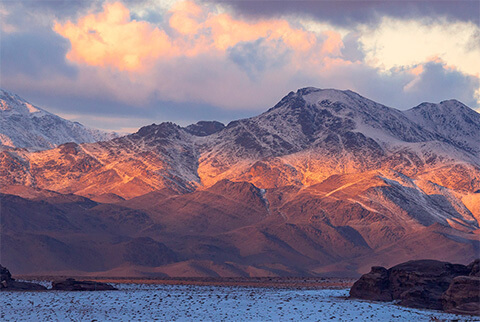 The future has a new home

NEOM is the vision of His Royal Highness Crown Prince Mohammed Bin Salman and is a centerpiece of Saudi Arabia’s 2030 Vision plan to grow and diversify the Saudi economy and position the country to play a leading role in global development. While NEOM is being driven and initially funded by Saudi Arabia, it is an international project that will be led, populated and funded by people from all over the world.

This article aims to explain two facts: they revealed that the Saudi NEOM project announced by Saudi Crown Prince Muhammad bin Salman is not a tourism or development investment project, but rather a revival of the biblical Kingdom of Noam, and to be the capital of the Kingdom of Israel.  This is expected after rebuilding the alleged temple on the ruins of Al-Aqsa, with the approval and support of the Al Saud, in implementation of the Zionist Masonic plan…

The city of Neom is mentioned in the context of the deal of the century, which is being established in the region located on the border between Egypt, Saudi Arabia, Palestine and Jordan, this name “Neom” does not mean as they say future and development, but it is a biblical word, and this name was mentioned in the Torah and means “Noam”, which is the name of a Jewish kingdom “ממלכת נוים”, which will be revived in that area of northern Saudi Arabia and Egypt, southern Palestine and Jordan.

…The NEOM project, which will be built on 26 thousand square kilometers, will be responsible for serving the Peres project, and will be based on energy, water and modern technologies, and the Israeli flag will be raised over the two islands of Tiran and Sanafir, Saudi Arabia, for their presence within the project, the government of the temple guards, meaning that the Zionist-Masonic project…

Another issue being covered up is that Egypt has leased 400 km to Saudi Arabia, regions that are filled with ancient monuments and will be handled by Jewish archaeologists, and they declare falsely that they have found Jewish antiquities, perhaps to make up for their failure to find even a shard of pottery indicating their ancient presence in Jerusalem in particular, and we have seen how Moshe Dayan, who occupied the West Bank, Sinai and the Golan in 1967, was burying some pottery and metal pieces, to say later that they found Jewish relics indicating them, and they did so in Lebanon in 1982.

Needless to say, there has never been a Biblical Kingdom of Noam, which the article helpfully transliterates into Hebrew as “Noim” to make it look legitimate.

This is definitely one of the more entertaining conspiracy theories I’ve come across.