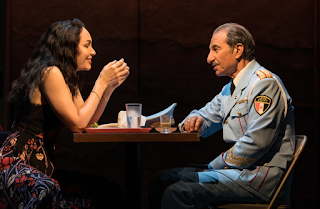 Legendary Israeli actor Sasson Gabay stepped into his new role as star of the award-winning Broadway show The Band’s Visit.  It is a new experience for the Iraq-born actor, who is best known in Israel for his film roles. Report in the Jerusalem Post:

Gabay, who originated the role in the 2009 film which formed the basis for the musical, is expected to remain in the show for at least a year.

The Band’s Visit swept the Tony Awards earlier this month, taking home 10 prizes including best musical, best actress and best actor for Tony Shalhoub, who originated the role in the play. It is one of three shows in history to win the “big six” Tony Awards – best musical, actor, actress, director, score and book.

Ari’el Stachel, the US-born Yemenite-Israeli who won best featured actor for his role in the show, welcomed Gabay to the team.

“We just welcomed this legend into our company and it’s blowing my entire mind,” Stachel wrote on Instagram alongside a photo of the two of them together. “Sasson Gabay is the Deniro of Israel – he’s the most recognizable and prolific actor in the country – and my cast and I are lucky to be sharing the same air as him. Literally a walking master class being on stage with him. Learning so much. So unbelievably happy that American audiences will now be able to witness his brilliance. And he’s almost instantly become my second dad so basically you can say I’m in heaven.”

Since sweeping the Tony Awards, The Band’s Visit has seen a surge in ticket sales, and the production released a block of tickets earlier this week through June 2019.