The publication of an anthology of essays by Sami Michael, the Baghdad-born writer, 90, is the occasion for this Haaretz tribute by his niece, Vered Lee. A communist, Michael criticised ‘ the discrimination, racism and inequality’ in Israel, Lee writes – faithfully following the Haaretz ‘discrimination’ playbook – ‘and depicted an affinity between Israel’s Arabs and Mizrahim, countering the Zionist narrative suggesting that Jews in Arab lands were subjected to unyielding hatred.’ But it is hard to argue that Michael himself, whose books are taught in schools and whose brother-in-law was the executed spy Eli Cohen, has been anything less than a pillar of the Israeli establishment. 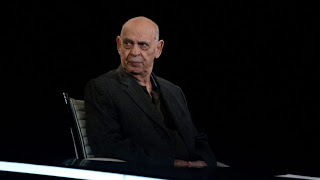 Sami Michael was born Camal Menashe, in Baghdad on Aug. 15, 1926, into a well-established Jewish family. His father, who worked as a broker between importers and merchants in the textile business, was an autodidact and bibliophile. The Jewish high school Camal attended was one of the most prestigious educational institutions in Baghdad; boys and girls studied together there in a modern secular atmosphere. At the age of 15, Camal joined the communist underground in Iraq, working against the regime and in support of democracy and human rights. He was in charge of Communist Party-affiliated groups at high schools, was active in poor Shi’ite neighborhoods and served on the editorial staff of underground journals. For a year he attended the American University in Baghdad and wrote for the local press.

In 1948, the state issued a warrant for his arrest, and he fled to Iran. Compelled to go underground and change his name, he purchased the ID of a dead man named Samir, later adopting the name in its shortened form after realizing that it had saved his life. He renewed his political activity in Iran, prompting Iraq to demand his extradition. He went underground again and a few months later arrived in Israel.

Initially Michael settled in Jaffa, but when the writer Emil Habibi offered him a position at the Haifa-based Communist Party newspaper Al-Itthihad, he moved to the northern city. He lived in the Arab neighborhood of Wadi Nisnas and published a regular column in Arabic under the pseudonym “Samir Mared” (“Samir the Rebel”), as well as short stories and articles in the party’s monthly journal Al Jadid.

Prof. Orit Bashkin, who teaches modern Middle East history at the University of Chicago, considers Michael’s early, socially conscious writing in Arabic, in her Hebrew-language article, “From Red Baghdad to Red Haifa.” Michael described the discrimination and neglect in the ma’abarot – the transit camps the Israeli government erected to house the influx of refugees in the state’s early years. He felt the pain of his relatives and acquaintances who were housed in the camps, and documented their social and political exclusion and the racism of the state authorities. Concurrently, he served as a roving reporter in Israel’s Arab villages, all of which were under the rule of the military government (which lasted from 1948 to 1966). In his articles he protested the absence of equal rights for Israel’s Palestinian citizens.