In the wake of events in Charlottesville, the current issue of the Australian Jewish News (AJN) contains the results of an online poll among its readers: “Are you concerned about the rise of the far right?”

Those results, given in percentages, are 58 per cent responding in the affirmative, and 42 per cent in the negative.

Since in practice anyone can respond to these AJN polls (anti-Israel lefties sometimes alert their followers to them on social media, the better to distort the results) this may or may not represent a true cross-section of communal opinion.

At the same time, as an indication of communal vox populi, the oral answers of five named and photographed Jewish members of the public to the question posed in the poll are given on that same page.  All five are indeed concerned about the rise of the far right, which is fair enough, but two of the five respondents appear to be somewhat confused:

“It does concern me, but in Australia it’s not as bad as the USA or Europe.”

Such naivity.  Such ignorance. Evidently, those respondents are unaware of the findings of the recently-published study by University of Oslo academic Dr Johannes Due Enstad entitled Antisemitic Violence in Europe, 2005-2015, which finds Muslims, not the far right, chiefly responsible for antisemitic hate crimes in every country except Russia. 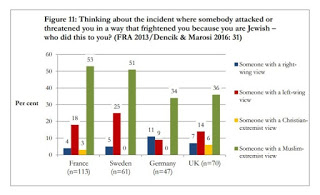 To quote from here:


‘….Who is responsible for the attacks on Jews? In every country studied, except for Russia, the perpetrators are disproportionately of Muslim backgrounds. A British study cited in the University of Oslo report notes that the proportion of Muslim perpetrators increases in the wake of “trigger events” in the Middle East.

In what might be considered a clumsy attempt to downplay anti-Semitism, German authorities do not classify anti-Israeli incidents as anti-Semitism. This results in absurdity. A Muslim firebombing of a synagogue can be classified as an anti-Israeli event, but not anti-Semitic. If any country should know better, it should be Germany. Is Kristallnacht going to be reinterpreted as not anti-Semitism, but a demonstration for racial purity?

The only country where anti-Semitic incidents are not disproportionately perpetrated by Muslims is Russia, and it is the only country in the University of Oslo study where Jews do not fear to express their Jewish identity when appearing in public. This appears to perplex the study’s author, as Russia contains both large Jewish and Muslim populations.

Yet the issue is easily resolved. In Russia, the large Muslim and Jewish populations live in the same country, but are generally separated by a vast expanse of land. Most Muslims live in the Eurasian Caucasus region. Most Jews live in Moscow and Saint Petersburg….’

In 2015 no less than 10,000 Western European Jews made aliya, and many more are thinking of emigrating.  The reason is not far to seek.

Below, a 78-minute video re antisemitism in the 21st century, and a 48-minute one:

As so often, the depth of the burgeoning threats to European civilisation posed by replacement demography is excellently and articulately expressed by the courageous Douglas Murray;  in this worthwhile 13-minute video he reminds his audience (approx. 5:04) that he has no Israel to which to escape:

It is a lesson that, for their progeny’s sake if not for their own, all Europeans (and other free peoples) should heed.