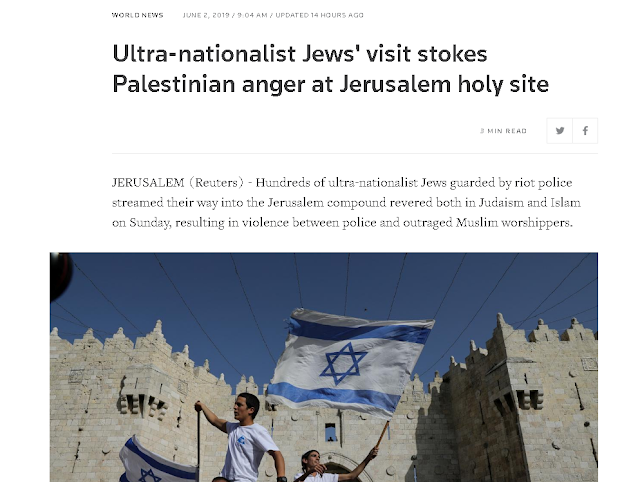 Another textbook example of media bias, courtesy of Reuters:

Hundreds of ultra-nationalist Jews guarded by riot police streamed their way into the Jerusalem compound revered both in Judaism and Islam on Sunday, resulting in violence between police and outraged Muslim worshippers.

The Jews who visited didn’t sing songs, chant nationalist slogans, pray or do anything besides walk and talk quietly. But to Reuters they are “ultra-nationalist,” and “ultra-” anything is pejorative  in journalism.

The Muslims who were “outraged” are not ultra-anything. They are just peaceful worshipers. Of course, the Jews never come during prayer times, so the Muslims weren’t worshiping. In order to build the contrast between evil Jews and peaceful Muslims, Reuters must employ the language of “ultra-nationalist” vs. “worshippers.”

The highly provocative visit came during the final days of the holy month of Ramadan when Muslims flock to pray at the compound’s al-Aqsa mosque, the third-holiest site in Islam where non-Muslim prayer has been banned since 1187.

Jews visit almost every day, but to Reuters their quiet touring of the area is “highly provocative.” We learn that the area is the third holiest site in Islam but not that it is the first-holiest site in Judaism. The ban on non-Muslim prayer, rather than being framed as Muslim intolerance, is written as a basic status-quo that is being violated – even though no Jew (as far as I can tell) prayed.

Police fired tear gas and rubber-coated bullets to disperse worshippers, some of whom threw stones and chairs as the Jewish groups walked across the esplanade in front of the al-Aqsa to angry calls of ‘Allahu Akbar’ (God is great).

Which came first – the tear gas or the throwing stones and chairs? Reuters is implying that the police attacked “worshippers” (prayer only happens indoors, the police did not attack any worshippers) for no reason and the Muslims responded with throwing things – the exact opposite of what happened!

This is not reporting. This is propaganda.