A recent call by the US ambassador the the UN, Nikki Haley, for an ‘examination’ of the Palestinian ‘right of return’ bodes a cut-off of US funding to UNWRA, the agency sustaining the Palestinian ‘refugees’. It is a timely opportunity to re-post an extract from this article by Lyn Julius in Jewish News. She argues for an exchange of refugee populations, not a Right of Return. 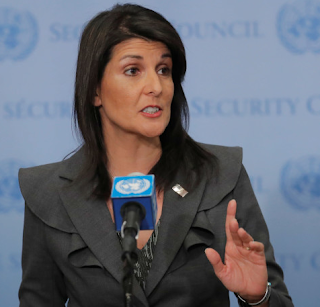 According to Adi Schwartz, author of a new book with Einat Wilf called The War for Return (Hebrew) , the problem at the heart of the Palestinian-Israeli conflict is that ‘Gaza’s inhabitants do not view that piece of land as their home, but rather as a transit camp they will inhabit until the day they can return to what they believe is their home. Because of this, they will far prefer to invest their efforts and resources in returning to their “true” home – by force if necessary – than in cultivating the temporary one where they currently reside.’

The idea that the refugees should return to Israel, and not to Palestine, runs counter to the two-state solution. What is the point of establishing a Palestinian state if the Palestinian refugees still cling to their ultimate objective of returning to Israel?

Apart from the fact that it would soon turn Israel into a majority-Arab state, little thought is given to the mayhem that such a return would produce. Refugee questions after such a long lapse of time have not been solved by return. The great majority of Palestinian refugees today never lived in the homes that they are programmed to ‘return’ to. Most might no longer exist. In 2010 the European Court of Human Rights ruled against Greek Cypriots who demanded to return to their properties in the northern part of the island now under Turkish-Cypriot control. As so much time had elapsed since 1974 when the Turks invaded the island, the Court ruled, in the words of Tel Aviv professor Asher Susser, that ‘it was necessary to ensure that the redress offered for these old injuries did not create disproportionate new wrongs’. If this was true for Cyprus since 1974 it is all the more true for Palestine since 1948. But the issue of the Palestinian refugees needs to be seen alongside the parallel plight of the Jewish refugees, who fled Arab countries for Israel in roughly equal numbers at about the same time. A permanent exchange of refugee populations occurred. The last thing the Jews want is a ‘right of return’ to countries which remain as hostile and antisemitic as the day the refugees fled.

As long as the Right of Return is the cornerstone of the Palestinians’ strategy, the 650,000 Jewish refugees who fled from Arab lands to Israel remain its antidote. Yet the issue of the Jewish refugees is either denied or ignored. When Jewish and Palestinian ‘narratives’ are juxtaposed, the Jewish refugees remain invisible. When Fisk goes hunting for original Palestinian homes and the locks which fit the Palestinian keys, invariably he finds a Jew from Poland or Romania now occupying the Arab home, never a Jew from Yemen or Iraq. In other words, Jews did not come to Israel because they were fleeing Arab and Muslim antisemitism.The innocent Palestinian is ‘paying the price of the Nazi Holocaust’ – a European crime.

Do the Palestinians really believe that they will return, 70 years after the fact? Even Robert Fisk is doubtful. But the two-state solution is now dead, he claims without a hint of irony, because of Israeli ‘violence’.

It seems that the Palestinian strategy is, with the help of anti-Zionist Jews, to radicalise Arab Israeli youth (sorry – the Palestinian citizens of Israel). Their greatest hope is to raise an insurgency of enraged Arabs within the Green Line. The far-left website 972 features Udna (The Return): this is is a subversive organisation, advocating certain war and turmoil, not peace, based on nostalgia for places that no longer exist and are only a few kilometers from where these young Arab Israelis live now. The young are not told any context: their villages were destroyed in a war which their side started and lost. (The Druze and several Bedouin clans in the Galil did not have their villages destroyed, because they did not take up arms in the 1948 war). And as usual for 972, the stories of Jews expelled from Arab lands – half the Jews of Israel – their former homes, their glorious synagogues, their seized land and property – is totally ignored. Another far-left anti-Zionist organisation called Zochrot, supported by EU bodies and churches, holds conferences actively preparing for the day when the Palestinian refugees will return. Zochrot considers the Jews from Arab countries only relevant in their role as victims of the ‘European, colonial’ state of Israel. There is never any discussion of compensation or even recognition of the injustice done to Jewish refugees and their descendants – now half the Jews of Israel.

Other internationally-funded Israeli organisations working for the Palestinian Right of Return include the Coalition of Women for Peace, Gush Shalom, the Alternative Information centre, Adalah, Mossava and Mada-al-Carmel.
Thus these organisations work against peace and reconciliation, not to further it.
—
Lyn Julius is the author of ‘Uprooted: How 3,000 years of Jewish civilisation in the Arab world vanished overnight’ (Vallentine Mitchell)