Restoring synagogues in Arab countries is a small price to pay for expelling a country’s Jews, argues Lyn Julius in this JNS piece.

To much fanfare last week, the largest synagogue in the Middle East was reopened in Alexandria, Egypt. Some 300 guests, including Egyptian Antiquities and Tourism Minister Khaled al-Anany, were on hand for the festive occasion.

The event made headlines from the United Kingdom to China—but only The Jerusalem Post pointed out that only three Jews were in attendance. Eight Jews now live in a country that once boasted 80,000 to 100,000. (Egyptian-born Jews and Israeli diplomats are planning their own celebration next month, but these visitors will be returning to their homes in Israel, Europe and the United States after the party.)

The Eliyahu Hanavi synagogue will never again host Jewish weddings or bar mitzvahs, nor will it ever muster a minyan. It will be no more than a museum to an extinct community and a perfunctory tourist stop. 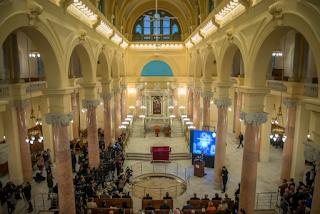 The media coverage of the event was typical of a trend hailing the restoration of Jewish buildings in countries with no more than a handful of Jews as somehow indicative of pluralism and tolerance in the Arab world.

Even Jews fall for the fantasy, grateful for the slightest acknowledgement that members of the Tribe once lived in these countries. “I’m very proud of what my country has done, and it symbolizes living together—today, there is no difference between Egyptian Muslim, Christian and Egyptian Jew,” gushed Magda Haroun, leader of the Cairo “community” of two Jews. “It is recognition that we have always been here and that we have contributed to a lot of things, just like any other Egyptians. ”

No journalist covering the restoration story bothered to ask why a once-glorious community has been reduced to eight souls in Cairo and Alexandria, the youngest of whom (Magda herself) is 67.

“Nearly all left after the founding of Israel in 1948 and during subsequent conflicts between the two countries,” The London Times reported. (Yet Egypt also divested itself of other non-Egyptians: Greeks, Italians, Maltese, Armenians.)

Not a word about the proximate causes of the Jewish exodus: bombings of Cairo’s Jewish quarter, overnight expulsions, months and years spent in putrid jails for no other crime than being Jewish, torture and rape of Jews taken prisoner in 1967 as “Israeli POWs.”

The Egyptian restorers did a magnificent job at Eliyahu Hanavi, even laying a glass floor over the remains of an earlier synagogue they discovered during their work. The Antiquities and Tourism Ministry undertook the $4 million project following the collapse of part of the women’s gallery and a staircase three years ago.

Recently Egyptian President Abdul Fattah el-Sisi declared his intention to spend $71 million on restoring Jewish sites, but the brief was hurriedly redefined to incorporate the repair of Coptic, Islamic, Pharaonic and Roman, as well as Jewish sites, lest anyone ask why so many of this country’s scarce resources be funneled into preserving the heritage of its erstwhile enemies.

It is surely better to preserve Jewish heritage sites in Arab lands than to let them crumble into disuse or be converted to other purposes, as has happened right across the Arab world. But el-Sisi wants to show that he is in control. He turned down outside offers of help and funding from Jewish individuals and organizations. If Jews come back to live in Egypt, he has promised, Egypt will build synagogues for them.

Jewish communal property in Egypt is viewed as part of the national heritage. The Egyptian government alone is responsible, as it is for the preservation of Tutankhamen’s tomb. No longer will Jews have any input, and Egypt’s last links with its exiled Jews will be severed.

This policy of nationalization extends to the creeping appropriation of movable property more than a century old, such as Torah scrolls and libraries. These are now being registered as “protected.” But no Jewish scribe or archivist remains in Egypt to curate and maintain these treasures.

Most galling of all, the communal records, essential to establishing a Jew’s identity wherever he may be in the world, have been declared antiquities. They remain out of reach; Egyptian Jews are not even able to get photocopies.

Four million dollars is a small price to pay for ethnic cleansing. There is never any need to apologize. Restore a few buildings abandoned by their owners and pocket the tourist revenues. It’s a win-win situation.

The Times erases the ethnic cleansing of Egypt’s Jews