According to an unconfirmed report highlighted in Jewish Press, the Basiji, a paramilitary Islamist organisation represented in schools, universities and other institutions, has threatened to destroy the tomb of Mordechai and Esther in Hamadan, Iran, in retaliation for the Trump ‘Deal of the Century’. The threat gives the lie that the regime is not anti-Jewish, only anti-Zionist.

Iranian authorities allegedly threatened to destroy the historic tomb of Esther and Mordechai in the city of Hamedan, and convert the site to “a consular office for Palestine,” according to ARAM, the Alliance for Rights of All Minorities in Iran.

The organization said Sunday in a statement posted to the Twitter social networking site, “members of the Iranian Basij attempted to raid the historic site yesterday in an act of revenge against the Israelis Palestinian peace plan by President Trump.”

There is no way to independently confirm the report, but if it is true, it would not be the first time the site has been threatened. 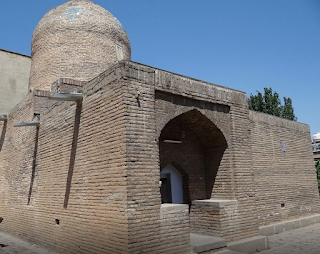 The tomb of Esther and Mordechai: threatened on numerous occasions

The mausoleum of the Biblical Esther, Queen of Xerxes I, and her cousin Mordechai, is the most important Jewish pilgrimage site in Iran. The tomb is visited by numerous people every year as Iran remains home to the largest Middle East Jewish community after Israel.

The Tomb was added by Iran to its National Heritage List on December 9 2008, where it was to be under official government protection and responsibility. But that didn’t last long.

In December 2010, a group of Islamists threatened to destroy the tomb claiming there were fears Israel might damage the Al Aqsa mosque on the Temple Mount in Jerusalem, according a report by Iran’s Mehr news agency.

“Muslims beware they have started the destruction of Al-Aqsa mosque while their second sacred site in Iran, the Esther and Mordecai tomb is at peace and no Muslims make a sound,” the protesters were quoted as saying by the agency at that time.

“We, the student basijis … warn Zionist regime leaders if they assault the Al-Aqsa mosque in any way we will destroy the tomb of these lowly murderers.”

Those who threatened to destroy the tomb were Basij members from the Abu Ali Sina University. (The Basij [Persian for mobilization] is a large paramilitary organization acting as the eyes and ears of the Islamic regime in schools, universities, state and private institutions, factories and ethnic tribes throughout the country.)