Last month, to much fanfare, Egypt announced it was devoting $71 million to restoring Jewish heritage. The announcement was later walked back (but except for this blog, the media did not notice): the money would also cover Muslim and Coptic site restoration.  What was Egypt’s motive? The Media Line investigates:(with thanks Lily, Boruch)

“[There] was exaggerated coverage to catch the eyes of western media and market Sisi as a tolerant leader,” Haisam Hassanein of the Washington Institute for Near East Policy told The Media Line.

To this end, he believes Cairo is seeking to shore up support from policymakers in the United States while encouraging Jews to travel to Egypt in order to boost tourism revenue. Notably, the effort comes ahead of possible constitutional amendments that would allow Sisi to remain in power beyond his two-term limit.

“[The announcement] was a short-lived joy leading to disappointment and a recollection of old promises gone sour,” Desire Sakkal, Founding President and Director of the Historical Society of Jews From Egypt, told The Media Line. “We hunger for deeds and not words, our ears are bursting with the latter. The conclusion of many is: ‘It’s all [theater].’”

Sakkal notes that there are very few Jews left in the North African country capable of conducting religious services and that tourists require special permission—which is exceedingly difficult to obtain—to visit Jewish sites.
“We believe the move by the Egyptian government is a reply to foreign criticism [about the treatment of] Egypt’s minorities and [is intended] to alleviate economic difficulties,” he asserted. 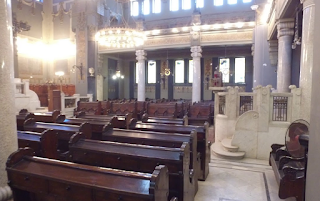 Inside the Adly Synagogue, Cairo

On this backdrop, Cairo has registered some 500 Jewish artifacts collected from several synagogues across that nation, including Torah scrolls, lamps, cups and candlesticks. Jews have lived in Egypt for thousands of years, although most of the 80,000-strong community was expelled following the creation of Israel in 1948.

Today, only a few Jews remain scattered throughout the state.

“Shortly after the announcement, the minister of antiquities himself issued a correction and said [the money] would go towards the monuments of all religions in need of repair,” Zvi Mazel, former Israeli ambassador to Egypt, explained to The Media Line.

“The media did not update the story to reflect the minister going back on his earlier statement.”

Mazel highlights the fact that Egypt still refuses to allow Jewish artifacts to be sent to Israel or other Jewish communities abroad. In his estimation, though most synagogues in Egypt are in a severe state of disrepair only a small number will ultimately be renovated.

“What Cairo is interested in is sending a message to Jews, especially those in the West, that ‘we are a country that takes care of its minorities,’” he said. “There are not really any Jews remaining in Egypt. The head of the community there, Magda Haroun, hates Israel with a passion and refuses to speak to any Israeli.”

Rabbi Andrew Baker, Director of International Affairs at the American Jewish Committee advocacy group, has been encouraging the Egyptian government to address the issue of dilapidated Jewish monuments for nearly 15 years.

“I discovered over my repeated visits to Egypt that the government was not interested in partnerships with any foreign organizations,” he recounted to The Media Line. “They maintain that Jewish heritage is also part of Egypt’s, and one could press them on this basis to take care of it.”

Baker previously met with Egyptian ministers on several occasions to discuss a plan to revive Jewish sites, including Cairo’s main synagogue and the Maimonides Yeshiva learning institute. The U.S. government backed his efforts and also made attempts of its own to persuade Sisi to proceed accordingly.

“The Egyptians have provided funds [in the past] but usually without any public announcement,” Baker elaborated. “I believe they recognize that these things are not popular with the public so they preferred to do them quietly.

“At the moment, the Egyptian government is spending over $5 million to carry out repairs and restoration of the Eliyahu Hanavi Synagogue in Alexandria. This in itself is a considerable contribution…and they deserve credit for doing this.”
The Media Line reached out to the Egyptian Antiquities Ministry and other government bodies for comment but did not receive a response.